Get China in Your Hands! New PSP Dynasty Warriors Screens 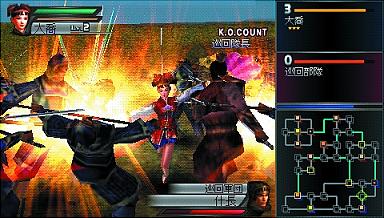 All Images (10) »
KOEI has released a selection of new screens for the upcoming PlayStation Portable version of its as-yet-untitled Dynasty Warriors entry into handheld territory. The much-admired strategic actioner has been around in one guise or another since 1997, this one putting the player in the role of a warrior from the Three Kingdoms or unaligned forces. The huge battle areas remain intact from the bigger console variations, as do the modes of play. There are two single-player only game modes, Musou mode and Free Mode. In Musou mode, select a character and battle through five stages. In Free mode, select a scenario and enjoy the battle.