?Harm to the country's sovereignty and territorial integrity? Get in! 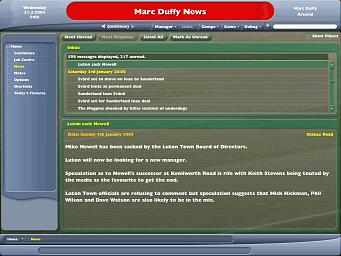 Reading a press release from the country?s Ministry of Culture, renowned for operating an Orwellian policy of cultural suppression and censorship, Football Manager ??poses harm to the country's sovereignty and territorial integrity.?

It would seem that China?s beef with SI?s latest product is the manner in which it represents various illegally occupied and/or Chinese-invaded areas of South East Asia as being independent states. Can you imagine?? Taipei of Taiwan, Hong Kong-Macao region and Tibet are thus represented.

The Ministry promised to ??investigate, confiscate and punish websites, computer software markets and Internet cafes, who disseminate or sell Football Manager 2005,? after it ??received strong protests from Chinese game players.?

Speaking to Sports Interactive?s Miles Jacobson this afternoon, it would seem that whole situation has caused something of a shock. In a statement released to SPOnG, the long-standing development studio boss said, ?We have been made aware of a press release from the Ministry of Culture in China and are reviewing its contents along with our local partner Ubi Soft. The release appears to relate to the English Language version of the game which is not intended for release in China and appears to have reached the country through piracy or other unauthorised means.?

Jacobson continued, ?To give Chinese consumers the best possible football management experienced, FM 2005 is being localised into simplified Chinese.?

SPOnG, politically charged beast that it is, is somewhat tempted to enter into something of a rant now. We won?t. We do advise readers who may be interested in the operational policies of the Chinese government to use the Internet and conduct a little research. Before you even enter into any humanitarian-driven learning simple try a Google search for ?China bans.?

More, hopefully confirming SPOnG?s banning in China, as it breaks.

Svend Joscelyne 10 Dec 2004 14:10
1/2
What's this? Spong not turning a straightforward new story into yet another editorial, biased or even with good intention?

China clearly over reacting to how the rest of the world see them. China really need a reality check, Taiwan isn't part of China full stop. Put some of your pride aside and get over the fact that Taiwan are better off without you.

If dodgy copies of FM are infiltrating their culture supression, they should worry about clamping down on piracy and not banning a game that is not even officially released in China yet. Blaming Sports Interactive holds no weight when it clearly China's fault an illegal game entered their country.

Perhaps piracy is a curse in China but also a blessing to an opressed nation who feel very cut off from the rest of the world. They want what we have game wise amongst other freedoms, and in a way see nothing wrong with that. Problem is that by officially banning stuff pushes games into the criminal arena for picking up a huge profit illegally. When this kind of thing happens piracy will always be huge business, and the circle of piracy is complete.

How many times will we do this same dance?