Half Life For Dreamcast Delayed

Sierra Studio announces today that the release of Half-Life Dreamcast will be postponed until January 2001 across Europe. 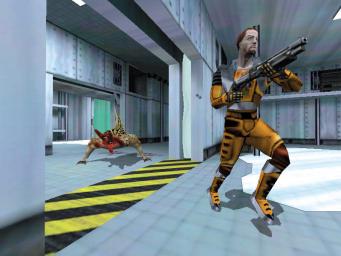 All Images (2) »
Half-Life Dreamcast is Sierra's first new-generation console title and as such, Sierra Studios wants to ensure that gamers will receive the most exhilarating experience possible on the Dreamcast. Releasing the game early next year will allow the developers to polish all aspects of the game and to fine-tune gameplay.

Half-Life Dreamcast is being developed by Northern California-based Captivation Digital Laboratories in conjunction with Gearbox Software and Valve. Half-Life: Dreamcast is set to be even more exciting than the original PC version. The Sega Dreamcast edition includes the original version of Half-Life with several enhancements. Highly detailed characters, enhanced weapons, and an all new exclusive mission, Half-Life: Blue Shift. The articulate animation showcases the power of the Sega Dreamcast and delivers a fresh and exciting experience for console gamers.

Founded in January 1999, Gearbox Software is a team of veteran 3D game developers based in Dallas, Texas. The Gearbox crew is made up of artists, designers, and programmers who have joined forces to form their own development house after stints at a variety of companies. Half-Life: Opposing Force was the company's first offering to the gaming community and has been the recipient of the prestigious 2000 Academy of Interactive Arts & Sciences' PC Action Game of the Year Award.
Companies: Havas Sierra On-Line Valve
Games: Half-Life: Blue Shift