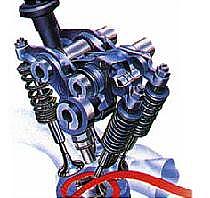 An engine, yesterday
Following the conference earlier this week outlining Polyphony Digital and Sony?s plans for the future of the Gran Turismo series, some startling revelations have come to light.

Although we have yet to receive official confirmation from SCE direct, it would appear that Polyphony, after four iterations of the sector-leading franchise, has managed to convince the somewhat backwards motor trade to allow car damage in Gran Turismo 5.

Following the announcement of the game, for PlayStation 3 naturally, series lead Kazunori Yamauchi explained that full aspect damage modelling will be included. No further details were offered, such as whether the cars will be flippable, another omitted feature that has detracted from the series since launch.

In other news, the game will be compatible with Sony London?s wondrous EyeToy camera, with various reports suggesting that cars will be mappable using images captured. Reports that actual cars will be able to be included in the game, as photographed by your good selves, seem dubious in the extreme.

Its nothing other races haven't been doing for ages anyway. Look at Project Gotham, ok so its mickey mouse damage, but its still damage.

Now if its full body damage with realistic crumple zones depending upon angle and speed of impact, then and only then will I be impressed.

btnheazy03 10 Nov 2004 17:32
3/12
this doesn't prove anything exept for the fact that this car mania is getting a little too unhealthy for his own good .. next thing you know he's having sex with the exhaust pipe

Yeah, but don't you mean for the NEXT NEXT generation? By the time GT5 gets released, Microsoft will be fully advertising Xbox 5.

I'm not about to buy a console for one game i may very well have to wait 8 years for. Come to mention it i wouldn't buy one for ANY "one" game.

what the hell are u talkin about KID - please i doubt that the stupid eyeshit will do the job, imagine the damn graphics ull see on the car u got on the game; how f**kin nasty. Like this other guy said, "Wow the PS3 is going to be able to do stuff that the Xbox did on tech demos...." lol.

claudioalex 11 Nov 2004 12:40
7/12
I dont see future in this car games, they are the same since the first gran turismo title, so, i would play a car game but with diferent interactivity. taking from real life a car model wont make me feel happy enough to buy this game, i will look for revolution.

Doing in a game what was previously only possible in a tech demo is an indicator of serious upgrades in computing power.

In a tech demo, like the Crash ones, you have nothing else going on but the processing required to simulate one car crashing into an object.

In a game like GT5 you have user input, the whole landscape and track, several cars, possibly crashing into each other and various environmental effects all going on at once. Not to mention the whole simulation of engines, gears, suspension and the other workings of the cars.

Doing the same level of deformation processing in a game that was done in the XNA demos would be an extremely impressive accomplishment.

Wonder if it will manage an online mode ????