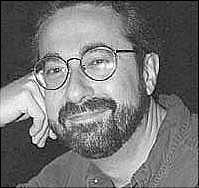 Feel my beard!
Eidos has overnight seen Warren Spector depart development house Ion Storm, in news that will add weight to talk that a buy-out of the Wimbledon-based publisher is weeks away.

Spector, famed for work on the Deus Ex and Thief series, was also rumoured to be working on the new Tomb Raider incarnation, currently under way at US studio Crystal Dynamics.

Eidos? US office issued the following statement: ?Eidos announces that Warren Spector has relinquished his role as studio director at Ion Storm. Warren has chosen to pursue personal interests outside the company, but he will continue to work for Eidos as an IP consultant. His insight and expertise is highly valued by Eidos, and the company looks forward to continuing its relationship with Warren in his new role.?

It is expected that Spector?s involvement with the new Tomb Raider game is likely to continue until the game sees release.

The reason behind Spector?s departure is still a mystery. The man, subject of an endless catalogue of rumours and, recently, if somewhat strangely, voted as games industry personality of the year, was also said to be looking into the possibility of launching a new development house in conjunction with Midway, though this has proven groundless to date.

It?s also worth remembering that perhaps he, you know, fancied a holiday. Expect clarification on the situation to come later this week.