Maximum Pursuit gets us hot 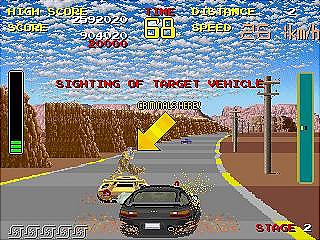 Not Chase HQ - but alike!
It has come to our attention that a rather delicious UK-developed PSP title is about to be shown at the Tokyo Game Show, carrying the mega-80s title Maximum Pursuit.

Our source described the game as being ??like Chase HQ, but the cops can jump out of the cars and straight into other cars. It?s cool as you like, a real arcade game and looks great on the PSP ? perfect in fact.?

So it?s a car action game in which you can get out on foot, like Grand Theft Auto? ?No, not like GTA,? we were assured. ?This plays like outrun. You follow the road and there are options to follow the left or the right route.?

Yes, we are also intrigued. The only other information we have is that Maximum Pursuit is financed by a Japanese firm and is being developed somewhere in the British Midlands.

As to whether this is Atari?s secret PSP action-driving game will be interesting to find out.

As soon as we know more, you?ll be the first to know.

Joji 23 Sep 2004 09:30
1/5
Not Chase HQ, but like it. Could it possibly be an update of Lucky and Wild? Whatever it is it sound cool enough. Just pray it doesn't turn out like the dire Starsky and Hutch game.

Criterion has sold Pursuit to PSP, and its soul to EA.

Twisted23 27 Sep 2004 18:36
3/5
Hey, what happened to this, it doesn't look like this was shown at TGS. Well either that or it was really well hidden. Oh well another Spong story I was exicited about turns out to be a load of balls.
I really wish you would research your stories better and not just go on what some old tosser said, that is if he actually existed.

I've said it before, and I'll say it agin, this is the difference between bold news reporting that takes risks, and some other sites that just re-write press releases, and only report what the games companies say they can.

If you take risks, some times things don't work out. Sometimes we come up trumps, sometimes we don't.

This game exists - so it didn't make TGS. It might never make it out at all, you know what the industry is like.

But for you to get all twisted and bent out of shape (and abusive) just because we said something, and it didn't happen suggests that you should get a credibility check. Or stick to those sites that just re-write press releases.

Twisted23 wrote:
Hey, what happened to this, it doesn't look like this was shown at TGS. Well either that or it was really well hidden. Oh well another Spong story I was exicited about turns out to be a load of balls.
Clearly it was a no show at TGS - our source was somewhat misled by his source, or their sources, or something. Bastard. Maybe the coders comatosed out due to pre-show demo crunch. How knows? S**t happens. :)

However, the game wasn't a figment our writer's fertile brain pan, much to the disappointment of those who like to put it about that we make up all our news.

The title has been changed just a little, and it's now known as "Pursuit Force". It's being developed by Bigbig and is to be published by SCEE later this year.