Analysts suggest what's what, Kutaragi to respond next week 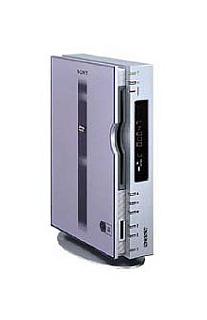 The shape of things to come?
Yesterday?s news that the PSTwo is on the way was something many had been expecting for quite some time. However, Sony has still not made an official statement alluding to what is, at this stage, just a rumour. But Ken Kutaragi, the undisputed king of all things Playstation, is expected to speak in Tokyo next Tuesday. If something exciting is going to be announced, that would be the likely time to do it.

So far, industry speculation has isolated some surprisingly specific features expected to be included in the PSTwo. We must emphasise that none of these details have been officially confirmed (apart from the fact that Sony has the PSTwo copyright), but they do make for some interesting reading nonetheless: and due to where they have been sourced, they do carry an element of credibility.

The Hollywood Reporter, fuelled by P.J. McNealy?s analytical observations, has opted to guess at an October 26th release date: specifically on the grounds that this would allow for a GTA San Andreas bundle, which would effectively be a Sony-satisfying poke in the eye to Microsoft, if they were planning any Halo 2 Xbox package. Especially if Sony's $149.9 price point is to be believed. The same analysts believe that the PSTwo will be 30% smaller than its current counterpart: which, in the lack of any material evidence, seems to be a perfectly reasonable guess.

The esteemed Germanic game watchers at Gamefront have also made a few intriguing suggestions. They have apparently received word from a Japanese firm partnering Sony for the launch of the PSTwo. According to these reports, the PSTwo will use an external power pack, but won?t be compatible with the broadband adapter. Presumably, the adapter will have been built in (in place of the power pack) rather than sacrificing the online options altogether. This same report has indicated that the PSTwo will have a similar design to an existing Sony DVD player (DVP-F41MS) and will be available in silver or blue. Contrary to the US-sourced rumours, however, it?s been suggested that the first PSTwo bundle will come packaged with Gran Turismo 4, rather than the next GTA title.

Only time (or Ken Kuturagi) will tell, but if the late October prediction is true, an official announcement will surely be forthcoming shortly.

Joji 17 Sep 2004 16:18
1/5
Keep asking myself if this is really worth Sony doing this, but with these extra details I suppose it could be. That previous sentence is followed by a very big but, and a question mark.

The reason I question why they are bothering with this is because of PS3 soon on the way. Would people actually bother buying a PStwo once the PS3 is out, and PSone still on sale?

This feels like the PSX debacle all over again, and though replacing the BB adapter in place of the power supply (something they should have done in the first place) is a good idea, I'd need more to justify the purchase, even more so now that PS2 price is coming down (and the fact I already have one).

Sony have too much money to waste, if they are gonna bother with this. I won't deny a new design can sometimes look cool, but it's unnecessary, and quite different than just changing an external colour, like a GBASP.

Mecha Ghandi 17 Sep 2004 17:29
2/5
Believe it or not, there are actually plenty of people out there without a console at all. The PSTwo could grab their attention.

I know quite a few folk (especially outside the typical Sony demographic) who are still umming an ahhing about getting a games machine. Then they see it plays DVDs, and that the older PS2 titles go for less than a tenner, and suddenly, Sony's turned someone's uncle (who has never heard of PS3 or Xbox) into a casual gamer...

And then there are people who want a second PS2 because they've thrashed their first so hard. In which case, a redesigned version is good for a change... especially if it does look like that DVD player.

ohms 17 Sep 2004 21:09
3/5
>The reason I question why they are
>bothering with this is because of PS3 soon on the
>way. Would people actually bother buying a PStwo
>once the PS3 is out, and PSone still on sale?

That's exectly what I thought when they annouced
PSOne, but it sold shedloads, and (eventually)
pushed the total sales of the original Playstation
from about 70 million to over 100 million.

Brown Force 19 Sep 2004 02:12
4/5
I still don't think this is a good idea. Because within two years (possibly one) Sony are going to be releasing PStwo (if the rumour is true) PSP and PS3. Now if you haven't already got one then why bother buying a PStwo when you can save up and buy a PSP which will most likley make you look more cooler to your mates, it does more (ie UMD and exclusive games and Portable) and will probably end up with a port of every PS2 game worth buying, new and old. Which pretty much makes PStwo idea redundant.

And then theres the fact that PS3 will be here with a year and people will be saving for that rather than buying a second PStwo. Basically I think Sony are trying to jugle too many money spinning balls at once. The PStwo will only give people more reason not to get a PSP in my opinion...and at this point, thats definatly not something Sony want if they want any sort of sucess with their Handheld.

On the other hand, a fresh design can give the market an enthusiasm injection. I was sick to death of PS1s until the PSOne arrived, and I very nearly bought one of those.

Which goes on to the other "PS3 is nearly here" argument (though it's hardly an argument, more a knee jerk response)... PSOne was launched against PS2, but it didn't stop it achieving good sales.

Then there are people like us a SPOnG who have just hosed our (nth) PS2, and need a replacement. And finally, there's me, who has always hated how loud the PS2 is, and was planning ot replace mine with a Silver one last week, but will now wait for the PSTwo - I'm no fan of the external power supply, but it will get rid of the f&cking annoying fan noise.

Also, if it has the BBadaptor built in, it might give on-line gaming the kick up the pants it really needs.

There are a million (OK, a handful of) reasons why Sony would do PSTwo, but no good reasons not to - plus, it might look really cool - I never really liked the PS2 design!
Posting of new comments is now locked for this page.