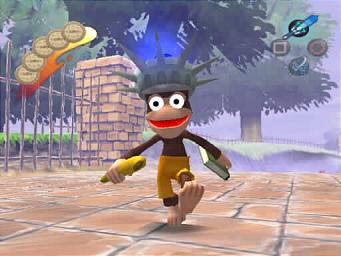 After Sony's confirmation that this year's TGS would see the full detailing of the PSP: in terms of technical capabilities and pricing, it's no surprise to see that various developers are readying to show off their own PSP software alongside the machine itself. Obviously, SCE will be bringing a few of its own key titles along: with Ape Escape, Hot Shots Golf, Dokodemo Issho and Ten no Kagi, Chin no Mon all confirmed in attendance. It is thought that Sony's offerings won't be limited to these though, with new titles expected to be announced; and with many string-back gloved fingers crossed in hope of a glimpse at Gran Turismo 4 Mobile.

Capcom has also confirmed which of its PSP titles will be paraded at E3. There's Darkstalker Chronicle (based on the Dreamcast's Vampire Chronicle) which is a return to traditional Capcom 2D pugilism; there's Devil May Cry and also Viewtiful Joe. Although it's not yet known how 'new' these games will be, having all enjoyed previous console outings, it will certainly be interesting to seem them actually running on the new Sony mini-screen.

Konami will be putting Metal Gear Acid on display, and because of its unexpected card-battling twist, there will surely be plenty of Snake disciples watching on with expectantly raised eyebrows. Koei, on the other hand, will be presenting the TGS crowds with Dynasty Warriors: which may not have any unexpected twists at all, but should work well as a measure of graphical capabilities.

Hudson has also confirmed that Ren Goku: The Tower Of Purgatory will be at TGS, and as a totally new and original title, that will be watched with great interest. There are likely to be more PSP titles creeping onto the TGS roster in the coming week: as well as a few surprise revelations once the show is underway. It all kicks off September, so news updates shall be forthcoming.

Kaxxx 13 Sep 2004 13:22
2/6
I believe they have been holding off the price for a reason, i cant see this thing being cheap.
However, it does seem to have alot of support on board and titles such as Devil May Cry will only help the look of the system. Should be a very interesting show.
more comments below our sponsor's message

ryohazuki-san 13 Sep 2004 13:58
3/6
Yeah ur rite about the price tag at the moment. I mean with Ninty's price range being more affordable 4 da average joe, PSP needs 2 retail reasonably well, besides DS will have da likes of Konami, Capcom, Sega, EA etc on der side aswell, buying da unit and game may show 2 ninty's advantage if priced rite.
AS in da words of da wise Del boy:
" He who dares, wins!"

tyrion 14 Sep 2004 12:17
4/6
I'd say the reason Sony are holding off on the price point is that they are waiting to see how many AAA games will be ready for release.

How will this affect the console's price point? Let me tell you what I think.

It's a well known fact that almost all consoles and hand-helds are sold at a loss, the deficit being made up in licensing costs on the games.

When launching a new console, companies need to cover their costs as quickly as they can, for shareholder satisfaction, therefore they need to weigh up the initial cost of the console against the pulling power of the initial games.

So in the case of Sony and the PSP, they need to see how many AAA games will actually be ready for launch alongside the PSP its self or just after. Once they have firm commitments from the publishers, they will release the price.

Nintendo don't have such a problem as they mostly rely on first-party titles for their consoles, hence they can release pricing information much earlier. Combine this with the earlier release date for the DS and you see how we know the price point for the DS, but not yet the PSP.

Just a theory, I don't work for Sony, nor do I have high-tech spying devices in their offices. Even if I did, I'd have to learn Japanese! :-)

YenRug 14 Sep 2004 12:46
5/6
I read somewhere that the PSP and PS3 are going to be built by Sony Electronics, rather than Sony Computer Entertainment, don't know the exact reasoning behind that. The important point was that Sony Electronics have stated that they will never sell any product at a loss, seeing as they are a more important part of the company, at least within the management hierarchy, then it's looking like this will be the policy on PSP and PS3.

For the life of me i cant see this thing being sold for under Ł300. With the fuctions they are including and the spec of the machine i cant see how they are going to sell it at a loss either. People can also buy it for the film side of it etc. and never really bother buying too many games, so how can you ever totally off set the price by the AAA titles that are launched with it.
Posting of new comments is now locked for this page.