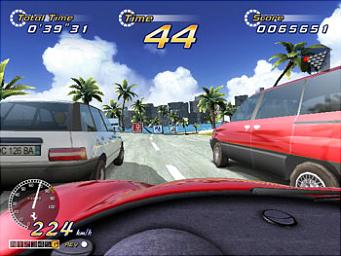 Various reports are claiming that Sega?s Chihiro arcade platform has been cracked, with code now running on modified Xbox consoles, it came to light yesterday.

As regular SPOnG readers will be aware, the Chihiro board is little more than an Xbox with upgradeable RAM and a few insignificant other routine alterations. Meaning that the ROM kits, for those managing to get hold of them, have become a prime target for the ever-industrious coin-op converters involved in back door scene.

At present, the platform plays host to Crazy Taxi High Roller, Ollie King, Outrun 2, The House of the Dead III and Virtua Cop 3 with others likely to follow.

As to what this means for the future of Chihiro remains unclear, though if ROM kits will soon be circulating via the Internet, Sega Sammy Holding may well back away from the board in favour of a comparable, uncrackable alternative.

We?ll bring you updates as they break.

You mean according to the posters of forum community www.ntsc-uk.com ?

>According to t'internet?
>
>You mean according to the posters of forum
>community www.ntsc-uk.com ?
>
>Please just post facts or acknowledge your
>source.

Wait, what's that noise? It sounds like a misguided baby crying in the distance. This news broke on Xbox Scene and System 16, not the almighty NTSCUK. Please, get over yourself. It wasn't flagged as such as Sega/Microsoft would not be too happy with us pointing people in the direction of what will soon be userguides to get the games running.

The more I think about it, the funnier and more ironic your post becomes. You made my day. Nice one.
x

NiktheGreek 7 Sep 2004 12:41
3/6
Interesting, this. On the one hand, this would suggest that current and future Chihiro games will be playable on the Xbox, opening up a wide world of extra games to owners of determined Xbox owners. However, with only two of those not confirmed for home release (Ollie King and Virtua Cop 3, with only the former looking like a difficult conversion due to peripheral issue), I'd assume pirates would go for the home conversions if any.

I've played the 90% build of Outrun 2 that was available at Gamestars Live and the final arcade version. What I played was a good enough conversion for me to not really be worried about the arcade original. Add to that the fact that the home port will be enhanced, and you have to wonder at present if it's worth bothering for any reasons other than proof of concept.

It has to be asked if companies should feel safe anymore when releasing arcade hardware based off existing consoles. After all, what's to stop somebody cracking the Atomiswave board and giving us flawless home versions to run on the Dreamcast? Namco's System 246 (PS2) and the Triforce board (Gamecube) are feasible prospects too, I guess. Something tells me we'll see more developers shifting towards boards based on high-end PC architecture (such as Taito's Type X) unless problems like this can be curbed...

Crazy Taxi would have had a real short life if it weren't for the mini games.

Arcade games are about getting a high turnover of users, not longevity.

NiktheGreek 7 Sep 2004 22:34
6/6
Yeah, I did mention that home ports would be enhanced - the Outrun 2 screens just go to prove my point.
Posting of new comments is now locked for this page.