Mac publishers "ready for the craziness..." 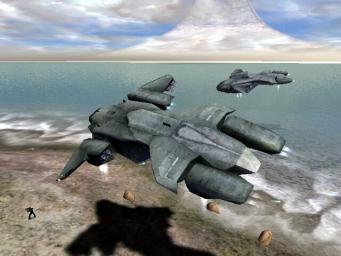 Wideload Games, the studio set-up by Bungie founder Alex Seropian, has today detailed the plans for its first project for Xbox and PC, awaiting completion in 2005. Few details of the game?s contents have been confirmed, but the simple fact that it?s going to be an action game based on the Halo engine ought to be enough to raise pulses.

The new Bungie title will be published by Aspyr Media, a company that boasts a leading market share in the world of Mac game publishing. Michael Rogers (Aspyr?s founder) is rightfully pleased to have struck up this new arrangement. In an era where escalating production costs seem to be a fairly consistent theme, Wideload has settled on a pleasingly dynamic development policy. The core staff first creates a prototype version of the game, and then a publishing deal is sought. Only once that has been organised does Wideload bring in a fleet of independent developers to bring the project to completion.

Now that this new game has a confirmed publishing deal, presumably work is about to intensify. And although Rogers clearly has confidence in the Wideload team, he does seem loosely concerned about the prospective invasion of the (apparently unhinged) supplementary freelancers, ?Wideload games has an incredibly talented team with a proven track record of delivering hit original game experiences? We?ve padded our walls and removed all sharp objects from our offices, so we can be ready for the craziness that Wideload will deliver.?

Expect plenty more news on this mysterious Bungie project as soon as time has brought the future into the present.