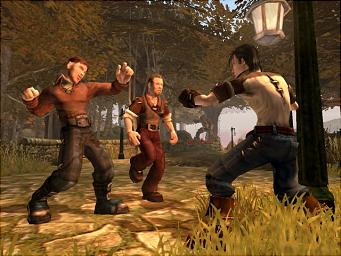 According to various reports cropping up overnight, not least one from an IGN staffer, Fable has already been completed in around nine hours when played straight through. That has to be something of a blow to the expectant fanbase already embracing Molyneux?s latest creation.

The same IGN writer reports that around 22 hours of play can be gleaned if all side quests are completed, a figure matching claims made about Fable?s longevity on the run up to its release.
However, the RPG community has come to expect a benchmark of around 40 hours, often with no option to ?skip? certain aspects of any particular title.

More news breaking this morning sees several unsubstantiated reports claim that the game can be beaten, with side-quests, in an astoundingly brief 12 hours, which is amazing if true.

We have contacted Lionhead for a response, though none was forthcoming at time of press. When we hear back, you?ll be the first to know.

YenRug 26 Aug 2004 16:47
2/14
This sounds like the typical "RPG Racer" story that comes out every time that there's meant to be a "big" RPG released. Some sad git decides he's only interested in getting to the end of the game ASAP, no thought of really enjoying the game or getting engrossed in the setting, just how fast they can get "The End" to come up. Usually turns out that most people end up running about 3 to 4 times the length of play time that these Racers achieve.
more comments below our sponsor's message

Jayenkai 26 Aug 2004 17:03
3/14
Yeah, I personally find it takes a good while to play through a Mario game, but there's people who can do the same within hours, even minutes..
The length of a game is all down, in my opinion, to the amount of "Levels" (or Quests, or Areas, or whatever) not to a pre-set time.

Brown Force 26 Aug 2004 17:20
4/14
Wow so someone sat down and completed the game in 9 hours. Peter as already gone on record saying if you concentrate on the story it won't take you long to get through. But considering theres 3 completly different endings you can pretty much times 9 by 3. Unless he completed it 3 times in 9 hours. As for the side quests, 22 hours isn't bad. But I still doubt all of them can be done in that time, taking in account that most quests will have two options 'Good' and 'Evil' which can open and close other quests. So unless he played the game a few times, he wouldn't have done all the quests.

But this isn't taking into account the fact of messing about, playing the mini games, getting married, having kids, exsperimenting with homosexiality on the game, cheating on your wife and exsploring and seeing the different variations of characters.

I never go by how long a game is 'supposed' to be completed by, because in Fable at least, its obvous that the side quests and the story (which clock some hours anyway) are only part of the game, just like the missions are in GTA. And also the person who completed it in that time might have just sat solidily determind to finish everything in the quickest time possible. Normal gamers wouldn't do that and some may complete it fast, but if they are genuinly playing the game, it certainly won't be that fast.

I still can't wait for Fable and I'm definatly buying it.

It's like assessing a car on its height, or a horse by the colour of its hair.

I mean, if Fable truly entertains for 9 (or 22) hours, isn't that a whole leot better than a game that keeps you bored for 60 hours?

And 9it's a cheap swipe at Peter too, because he's had high hopes, and made bold claims for Fable. But I don't think being ABLE to complete it in nine hours necessarily condemns the game. If it's unentertaining nine hour it will. Of course, I'll never know, not having (or wanting) an Xbox.

Newtynho 27 Aug 2004 00:43
7/14
Based on the time an Ign reviewer took to "complete" the game, I suspect I'll be spending some good 30-45 hours with the game, at least the first time through. I'm often amazed by how fast some people claim to have "completed" some games. Remember that guy who finished Metroid Prime in less than 2 hours?! Honestly, I can't see how anyone can enjoy playing a game rushing like that, except, of course, if the game is designed to be played this way and rewards you for constantly trying to beat the clock (like Otogi); but this clearly isn't the case with MP or Fable!

I know I could be wrong, maybe the Ign guy did take his time, saw most of what the game has to offer, and finished it in 22 hours (I doubt it), but even if that's true, I can only agree with DoctorDee's comment about it being entertaining or not. I'll judge it when I play it!

zerocool 27 Aug 2004 07:10
8/14
gawd i hate games now a days. they are all so short. i remember back in the day even a short rpg was at lest 30hrs now LONG games are like 10 hours. like recently i passed prince of persia: sands of time (which in my opinion was one of the best games of last year) in just 7 hours. i was like wtf?!? that was the only game i actually bought during the holiday season and it only took me freakin 7 hours to pass on my first try. it seems like they are making games shorter and shorter nowadays. i guess because all these stupid kids have no attention span any more. thats why all games are stupid 3rd-person shooters or fps's nowadays. all this hipe on fable is crap now. s**t if u can pass an rpg in 9 hours, its not worth playing. mine as well do some role playing with the woman instead

What is all this "pass" s**t? Is it a new word you "kids" on the "street" are using. I mean how the f**k do you pass a game other than by walking by the shelf it is on in the store?

Does it mean that you can fail a game too?

What is the logic and etymology by which completing a game is "passing" it?