Xbox and PC versions of GR2 completely different from PS2 and Gamecube. 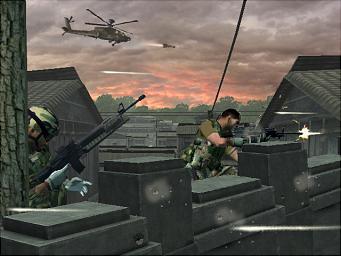 Ghost Recon 2 - but which one?
All Images (4) »
For those lucky enough to own multiple consoles, the choice of machine for a cross-platform release can sometimes be a bit confusing. Do you go with the more wallet-friendly PS2 version? Does the Xbox?s extra graphical oomph warrant those extra few quid? Does it play better with a ?Cube controller?

Now that conundrum is set to get more complicated for anyone awaiting the release of Ghost Recon 2, because there will be a clear distinction between the versions available on the different platforms. It?s not just a superficial difference either - not like the odd extra character in Soul Calibur 2 - because the four Ghost Recon 2s will be completely different games on several levels.

The Gamecube and PS2 versions are being handled by Shanghai Studio, whereas the technically superior PC and Xbox versions are under development with Red Storm. Not only are the games experiencing different production procedures, but the storyline will also be altered. For one reason or another, the Red Storm version will be set five years after the Cube and PS2 versions. No official reason has been given for this, but it could well relate to the North Korean government?s objections to the storyline back in June. Perhaps a less controversial script was called for to encourage the international scale online play that the Xbox and PC games will hope to embrace.

Either way, it will be interesting to see how different the two GR2's turn out. Metal Gear Solid fans are being faced with a similar dilemma: Snake Eater (PS2) versus Twin Snakes (Gamecube). At the end of the day, those are two separate games and dedicated fans will buy them both. The Ghost Recon 2 versus Ghost Recon 2 decision would be far less clear a proposition.

The Xbox and PC versions are planned for a November 25 release, and the PS2 and Gamecube versions will also be available around that time, although specific dates have yet to be set in stone.
Companies: Red Storm Ubisoft Shanghai
Games: Tom Clancy's Ghost Recon 2

Joji 25 Aug 2004 18:30
1/4
I guess the storyline would anger North Korea, and the very thought of their south korean neighbours playing this game a plenty and online just over the boarder makes their blood boil. Why? Because South Koreans would buy it anyway despite it's story line because it's just a game. South Koreans would be more able to draw the line between real and game worlds.

I didn't see the japanese complaining and Medal Of Honour Rising Sun, even though that was set during WW2, when they were the enemy of the free world. And the russians never complained about their negative portrayal in Freedom Fighters (not to my knowledge anyway). North Korean sabber rattling, that all this is, but is it spoiling or enriching GR2? Perhaps it might be for the better.

veryBoardAtTheMoment 28 Mar 2006 02:51
2/4
This is way off subject, but I wanted to point out something. You say that this game sufferes from a 'Schizophrenic Breakdown' as if you were comparing it to having multiple personalities. Schizophrenia has NOTHING to do with multiple personalities.... that is an entirely different problem. I figured I would inform you of this, as the image one portrays is lessened when words are improperly used.... especially in headlines.
more comments below our sponsor's message

tyrion 28 Mar 2006 08:02
3/4
veryBoardAtTheMoment wrote:
...the image one portrays is lessened when words are improperly used.... especially in headlines.
I presume, since you are a wordsmith, that your handle implies you are exceptionally made of wood right this second. Or perhaps you are incredibly in a management position of a company at the moment. Or even that you are currently experiencing an intense feeling of two-dimensionality.

The thing is, we are not a medical site, we are a games site, and a headline that included "multiple personality disorder" wouldn't read as well. So we used the "popular" meaning of Schizophrenic to get the point across to our readership.

vault 13 28 Mar 2006 18:13
4/4
Is not anyone going to comment on the incorrect example of Snake Eater and Twin Snakes. They are COMPLETELY different games! That's like comparing A Link To The Past and The Wand Of Gameleon because they came out around the same time.

Oh man, have you guys played this great new game! The Wand Of Gameleon!? It's soooo cool. You play as this Princess Zelda and it's for this great new system the CD-i and........