GBA Payback by the end of November 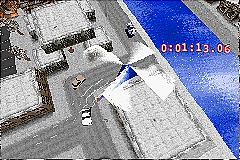 All Images (4) »
After the continuing ?will it, won?t it?? GTA GBA debate, Zoo Digital has finally confirmed a release date for its own Grand Theft Auto-styled Payback. ?Offering top-down mission-based driving in a fully realised 3D world, ?Payback? features criminal mayhem across more than 10 distinct, living cities each with their own unique feel?, goes the press release. So, in fact, it will be uncannily similar to Rockstar?s earlier criminal capers, with the addition of some slightly three dimensional graphics.

There will also be an intriguing ?Rampage? mode which ?dynamically generates missions? in a random fashion. If this works effectively, it could provide a welcome extension to the game?s longevity. On top of that, there will also be a four player mode via the GBA link cable.

Gearing up for an October 22 release date, Zoo Digital will be pleased to get Payback on the shelves before talk of PSP's and DS's takes over completely.
Companies: Zoo Digital
Games: Payback

I applaud the use of the 3D options no one has really used on the GBA, but it's right at the end of it's life cycle almost. Of course if it's any good I'll bag a copy.

I think Rockstar might have a thing or two to say about that.

Y'know, I've never actually owned at GBA. Initially due to its in excusably bad screen that, despite the Nintendo TV commercials showing players using the damn thing all manner of poorly lit situations, was next to impossible to use without summoning a head splitting migrain. Once Afterburner and latterly the GBASP were released, that there was nothing I really wanted to play, let alone find a free timeslice to fit further gaming in.

If this little gem lives up to expectations, I might just have to take the plunge.