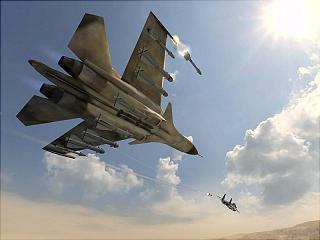 All Images (6) »
Despite the Daily Mail-fuelled flak received by socially controversial games like Manhunt, there has been surprisingly little questioning of what is perhaps one of the most politically-insensitive games recently conceived, Digital Illusion?s Battlefield 2 for PC. Due to be published by EA, it?s an almost traumatically realistic online battle simulator, set in the modern day Middle East.

As soon as we managed to suppress our collective peaceful nature and stop hugging the trees, we could finally see the woods, and they look absolutely amazing. Whatever criticism one might have of such a game being published as a form of entertainment, in a climate where people?s lives are being destroyed by the same events, technically and creatively it is no small feat.

Battlefield 2 supports up to 100 players simultaneously, and sports totally new graphics, audio and physics engines. Visually and conceptually speaking, this should be something to look forward to. It?s due out at some point in Q1 2005 - check these new screens in the meantime.
Companies: Digital Illusions Electronic Arts
Games: Battlefield 2

Joji 17 Aug 2004 15:53
1/3
Many will play it because it's a game, and many are capable of separating the grim realities of a far away nation to the back of our minds, when we enter this coded yet very realistic world.

I do reckon that publishers and developers should try to be sensitive to real world situations, but by how much I couldn't say. Is it fair, and okay to make an entertaining game out of a current conflict, or should we wait til a conflict is over, and wounds have healed more?

Currently there are other conflicts going on in the world, that we never hear about besides Iraq and Afghanistan. I think these lesser known conflicts would deserve more attention if attached to a game. Them being in a game would raise more awareness of them, and discussion and debate could follow suit. This would be the smartest move of publishers and developers, but we are yet to see it.

Deviluck 17 Aug 2004 18:46
2/3
Personally, i see the battlefield series as an immensely detailed mess, though very entertaining.

Yes there are sensitivity issues, but then, really? This is close as some of us get to it, and its a game, not the real thing.

For the people (soliders) whose familys that would be against such a game, i would tell them not to buy it, as battlefield has a huge fan base, and its looking great.

James Francis 18 Aug 2004 12:39
3/3
Wow, what a journey to just make a comment! Surely you guys can streamline that to something more direct?

I doubt we can quite class Battlefield 2 as politically insensitive. Remember, these are the same guys who left Nazi insignia out of the original game. I think the EA policy refs are hawking over the sequel as well...

Besides, just because it's current shouldn't make it taboo. At least game makers are braver than most movie directors...
Posting of new comments is now locked for this page.