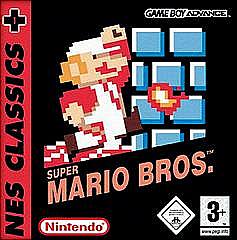 All Images (2) »
If Nintendo Japan needed any reassurance to its argument that technology advancements are less pertinent to gamers than they once were, and that the scene is more about the games (and nostalgia), it need look no further than the latest sales charts from Japan. The full Famicom-mini collection of 20 GBA re-releases has shifted over 2.7 million units since its launch. That's an impressive figure considering many of those customers will have already played or purchased the original Famicom versions.

With nine out of the ten games released in the 3rd wave of the Famicom-mini series occupying slots in the top 10 sales chart, Nintendo has a firm grip on Japan?s gaming community. Although this may in part be due to the time of year, and therefore the notable lack of competing releases, even the superb Winning Eleven 8 only managed to squeeze in at number 4.

The Classic NES series is unlikely to do as well outside of Japan, because Western gamers are arguably less dramatically affected by the ?collector craze?. But for the many GBA owners who would enjoy re-visiting those heady 8-bit days, Nintendo has now confirmed the line-up for the US release of Classic NES Series 2. This is set to comprise of: Legend of Zelda 2, Dr Mario, Metroid and Castlevania.

Joji 12 Aug 2004 23:30
1/2
Not surprised by this, and it proves Nintendo's point that simple games can sell, as well as more complex 3D games. Looks like lots of long dormant japanese ex gamers are coming out of hibernation, to feed off the Nintendo classics they have been enjoying on emus and ol Famicoms for so long.

A good move by Nintendo, one that Sony would most likely not do. I still think they should sell them as a collection of games on one cart though and give folk value for money, but at the same time they are tackling or complementing the emu scene. If so perhaps we might see a SNES range later on, if they can sort it. Then perhaps I might actually get Assault Suits Valken to play portably.

And yes, I'd be up for some NES Double Dragon 3 and Castlevania 2 and 3 for sure.

Alan is my first name 13 Aug 2004 02:30
2/2
To my knowlege the series WAS doing well outside of Japan.
Posting of new comments is now locked for this page.