The World Is Not Enough

EA is very excited to share with you the great news about Bond... James Bond! 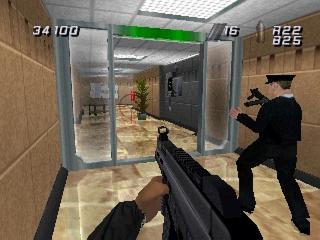 Under the new EA GAMES brand, the company's highly-anticipated first-person action title The World is Not Enough (TWINE) for the Nintendo 64 has received a confirmed ship date of Tuesday, October 17! Adding more exciting news into the mix, The World is Not Enough for the PlayStation will follow shortly in early November. Based on MGM's blockbuster movie, both TWINE titles will come packed with challenging mission-based levels from and inspired by the movie, a multitude of Q-lab weapons and gadgets -- some which are exclusive to each platform, as well as an array of recognizable characters from the movie. Players must use their wits, like Bond, as well as gaming prowess in order to successfully complete objectives... and save the world.

The N64 game contains a total of 28 single and multiplayer levels, over 40 weapons and gadgets, as well as crisp cinematics and streaming voice dialogue. Additionally, the 14 unique multiplayer levels support up to four players and four additional AI bots to create arenas packed with action and excitement.

The PlayStation game will offer 11 challenging single-player levels, more than 30 weapons and gadgets, as well as dynamic cinematics and more than 20 minutes of actual movie footage.

Companies: Electronic Arts Eurocom
Games: The World Is Not Enough