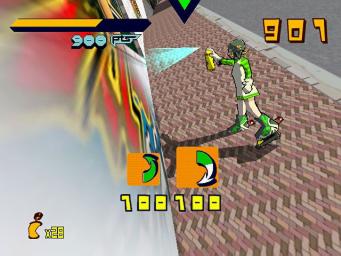 All Images (2) »
A video game in which digital kids on skates cruise through a fictional city spraying graffiti on public buildings has city officials seeing red.

The Milwaukee Common Council wants Sega of America to cancel the U.S. release of Jet Set Radio, saying the game promotes graffiti vandalism, a problem the city has been combating since the early 1990s. The council recently passed a resolution asking Sega to stop making the game. "It lionizes taggers as these creative artists," said Alderwoman Suzanne Breier. Milwaukee is the only city so far to complain about the game, scheduled for release in the United States Oct. 31, Sega spokeswoman Gwendolyn Marker said, "Basically, we have no plans to stop publishing Jet Set Radio".

The game, already available in Japan, features characters armed with spray paint who try to elude police and spray paint or "tag" as many public buildings as possible without getting caught. In the Japanese version, pop-up phrases offer a running commentary on the game, including phrases such as "Get paint, do damage," "Nothing like defacing a little public props" and "Look out! It's the MAN." Marker said the game does not condone acts of vandalism. "It's a fantasy. It celebrates graffiti as art," she said.

She said U.S. content standards are different and the phrases would not appear in the latest version. She declined to elaborate, saying the game was still in development. The game also contains a warning saying graffiti vandalism is a crime, Marker said. But that's not enough for Milwaukee officials.

The resolution the Milwaukee Common Council passed unanimously also denounced the game, saying it makes defacing public property seem fun and cool to young people. Breier said she planned to ask other Wisconsin municipalities to draft similar resolutions. The city spends $1 million a year on graffiti prevention and cleanup and anticipates an even bigger problem after Jet Set Radio is released, according to the resolution the council passed.

Milwaukee saw an explosion of graffiti in the early 1990s and began to aggressively fight such vandalism, including passing an ordinance making it illegal to sell spray paint or wide-tipped markers to minors. Milwaukee has seen a steep decrease in the last four years in graffiti vandalism, Police Capt. William Fadrowski said.
Companies: SEGA
Games: Jet Set Radio