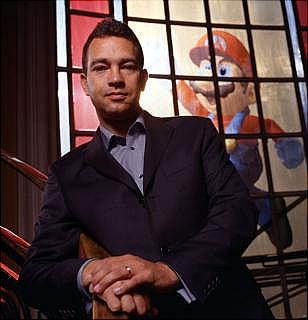 It has emerged this morning that Nintendo Europe managing director David Gosen has quit the firm after a five-year stint at its helm.

Leaving Nintendo Europe at the end of August, Gosen will move across to mobile games firm Digital Bridges, taking on the role of COO. A replacement for Gosen's role has yet to be named, though the company will promote Jim Merrick to senior director of European marketing, and Tim Freystedt to senior European marketing manager.

"David has made a huge contribution to Nintendo over the last five years and we would like to thank him for all his hard work and wish him all the success in the future," said Nintendo Europe president Satoru Shibata.

The shock news comes hot on the heels of Gosen's most outspoken comments to date, during a recent ELSPA conference in London. "For every game magazine editor bored with current products, there are hundreds of thousands of gamers across the world just discovering them - today's gamers are still hungry for today's games," exclaimed Gosen earlier this month. He went on to question predicted high pricing of future competitors' hardware: "As hard as it may be for those editors to believe, not everyone outside their circle is prepared to pay a high price for a new console."

Gosen even took a few pot-shots at Rockstar's best-selling GTA series. "Grand Theft Auto, ultimately, is a dead end street, and as a businessperson, I don't relish the role of defending our business from charges of gratuitous violence," he said.

Gosen concluded his outspoken day with a long-overdue criticism of the games retail sector's short-sighted bundling of consoles with games that simply would not move from shelves as stand-alone products. "If we give consumers ten games in a bundle, of which eight are sure to disappoint, what have we actually achieved?" he asked. "A disaffected consumer!"

The timing of the above comments, combined with the absolute fact that they were totally out of character for the NOE boss, have been pointed to by some industry pundits as being inextricably linked.

Vin 30 Jun 2004 19:16
6/9
"Grand Theft Auto, ultimately, is a dead end street, and as a businessperson, I don't relish the role of defending our business from charges of gratuitous violence".

Ta ta, then. You clueless tit.

I have not met the man and may like him if I talked to him, even if not, there is no need for obscenities because he moves to a new company.

I could make fun of the matter that he is moving to a mobile games firm when Nintendo finally are doing new things in the mobile (hand held) sector.

>"Grand Theft Auto, ultimately, is a dead end
>street, and as a businessperson, I don't relish
>the role of defending our business from charges
>of gratuitous violence".
>
>Ta ta, then. You clueless tit.

The way the UK and many other countries appear to be closely shadowing the Litigious States of America, I think he may have a point here.

30-odd years ago, who would have imagined a company being successfully sued for serving hot coffee to someone stupid enough to jam it between their thighs whilst removing the cup's lid, or for making somebody fat because they're too damn idle to get off their fat arse and make some real food.

Expect Rockstar to be sued for some apparently GTA or Manhunt-fueled future massacre, and a class-action against the beer companies to liver sclerosis "suffers".

Joji 2 Jul 2004 12:23
9/9
I don't agree totally. Nintendo have been cagey in Europe for a long time. This will have to change if they wanna go up against Sony and MS next round.

Things are beggining to happening, Long ago N64 owners were denied Animal Crossing and Harvest Moon, now we have them because we wanted them. They are asking us about what we want in the NES classic range too. Each step is a move for the better, I know this won't be easy for them though or Sony and MS for that matter.

The EU is expanding every now and then, it currently 25 nations from the 16 or so that it used to be (correct me if I'm wrong). This could mean more languages to translate into games meaning longer waits eventually especially for rpgs.

As for Mr Gosen, I have nothing against the guy since he was a public mouth piece for Nintendo. He says what they tell him to more or less, but he's entitiled to seek other employment if he wishes, good luck to him. It's interesting that he's moved to a mobile games division, since Nintendo said not so long ago that they would be moving into this sector. Are these related in anyway? Who knows.
Posting of new comments is now locked for this page.