MS outlines the hazards of the MMORPG... 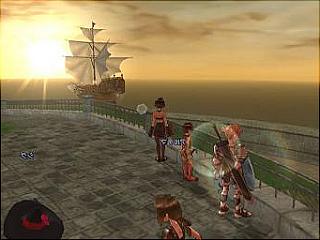 All Images (5) »
When Microsoft Japan announced the cancellation of one of its key titles - True Fantasy Live Online - it surprised many industry watchers. Xbox sales have been lacklustre in Japan, and True Fantasy was supposed to help reverse this struggle. To understand the reasoning behind this, the officially registered web ring of Japanese Xbox fansites issued Microsoft with a series of seven key questions.

After Warhammer Online was canned earlier in the week, there seems to be a common theme emerging, implying inherent problems with MMORPG development. If developers let such ambitious projects become too big in their scope, it becomes unpractical and uneconomic to complete them. Microsoft seemed to have identified the same problem: "Things became very indefinite and worrying and we thought of delaying the game yet again, but we took the difficult step in ending development of the game."

However, it?s not all bad for MMORPG fans. In the answers detailed below, Microsoft has hinted it may be producing a similar project in the future.

Q: How far along in development was TFLO?

A: The virtual world of True Fantasy Live Online was relatively complete. It was a living, breathing virtual world by the time we concluded development.

The development of True Fantasy Live Online was a long, three-year endeavour for Microsoft. We were working very hard to get the game to our customers as soon as possible. However, when we were preparing the beta test program, we ran into problems in our efforts to build a stable online experience and were forced to make the regrettable decision to cancel development. Believe us when we say that it was a bitter decision to make considering the support you all gave us. We also housed deep love and attachment to the game.

Q: What was the most prudent reason for cancelling the development of TFLO?

A: Many online games suffer long delays in order to work out all problems of developing such a game. With that said, we became very concerned at just how long it would take to finally wrap up development. Things became very indefinite and worrying and we thought of delaying the game yet again, but we took the difficult step in ending development of the game.

Q: Can you say for certain that TFLO development is dead? Is there any chance in the future that development will continue again?

A: Development of the game ended when we announcement its cancellation. However, there is ongoing debate and discussion within our company, but we cannot tell the public anymore than that.

Q: Clearly you were having trouble developing this game, yet you continued with a full-fledged beta test application process. Why is that?

A: When we began accepting applications for the True Fantasy Live Online's beta test program, we were deep in development of the game. It was not until afterwards when we investigated the game from a number of angles and decided to conclude development of the title.

Q: As for the TFLO properties you currently have (game world, characters, game interface, etc), is there any chance we'll see some remnants of it in the future? Perhaps in a different game?

A: As for saving the assets we have developed so far and using them in a future project, we really cannot disclose our internal discussions about this. However, the elements that people were excited for may be utilised at a latter date and in a different form.

Q: What can we get excited about now that True Fantasy Live Online is cancelled?

A: On July 17 in Harajuku, Tokyo, Microsoft Game Studios announced eleven new titles. Among those titles are three new role-playing games and Halo 2, which was awarded three Best of E3 2004 awards. We were also happy to announce a domestically developed title, Phantom Dust.

We are also working very hard to bring you a new Japanese-developed role-playing game to take the place of the now-defunct True Fantasy Live Online.

Q: Would you like to give us fansite owners a message to announce to our readers?

A: Again, thank you all for your incredible support of True Fantasy Live Online. All of us at Xbox Japan want to say how sorry we are to have made the decision to end development of the game. It was truly discouraging to end development of a game that came out of Japan and captured the attention of the world. However, we have heard the voices of the fans and that has made us work even harder at bringing you exciting titles in the future. We will work hard to better service you all in the future.
Companies: Microsoft Microsoft Game Studios
Games: True Fantasy Live Online

Brown Force 24 Jun 2004 12:07
1/1
Well even though I really wanted the game. I can understand why they cancelled it. It was just going to take too long to make it the way they wanted it and by the time it came out, chances are Xbox 2 would already be here. Its the downside of rushing the next Gen race I suppose.

Personally if I was them, I would be seriously considering reworking this title for an Xbox 2 launch title. Not only would this give them a flying start in Japan (probably) but if it was released along side Perfect Dark Zero and Project Gothem Racing 3 all as launch titles...I seriously doubt any other console could even dream of getting a stronger launch...

Though again its all purely speculation. Just seems senseless to work on a game for 3 years and spend all that money on it and then just cancel it just like that and do nothing with it in the future specially when were on the verge of the next set of consoles, which could make development that little bit easier...