Command and Conquer 3 ? it Lives! 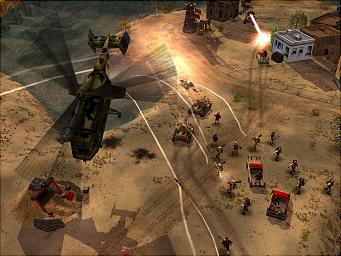 All Images (3) »
You may have picked up yesterday on various reports that spoke of the first screenshot from Command and Conquer 3 being accidentally leaked. As things turn out, the image, which for legal reasons we cannot show, was genuine, meaning that the game is alive and kicking.

?What you saw was a concept/inspirational piece of art that we did over a year ago that displays on our internal EA monitors here at EALA,? said a spokesperson from Electronic Arts Los Angeles. ?Concept art is our "What if?" avenue to explore things we may or may not want to do in the future with game content, a certain look, or atmosphere/tone,? he continued. ?For your information, it's an image of a Scrin Primal defending against a GDI attack on a Scrin base. Obviously, the primal is winning. And yes, there are still a bunch of us ex-Westwood guys here.?

And don't forget a DS version of C&C, please EA. This would rock something special.

Alan is my first name 22 Jun 2004 15:18
2/6
The problem with Command & Conquer was that it was out about the time I wasn't playing it because Age of Empires totally kicked its figurative buttocks up and down the figurative street.

But lets be honest here...does anyone really expect it to surpass Rise of Nations?

Joji 22 Jun 2004 16:51
3/6
Age of Empires I haven't played though I hear it's good.
I think C&C has lost it's way a bit, they need to get back to basics, that's why I think a DS version would be great. C&C and Age of Empires have never translated well onto any console that I know of.

Deviluck 22 Jun 2004 22:16
4/6
I think its great news, loved all the previous games and would buy it for PC as the PC is the best platform for such game, though it would do well on the PSP, i doubt the DS would be good enough.

>I think its great news, loved all the previous
>games and would buy it for PC as the PC is the
>best platform for such game, though it would do
>well on the PSP, i doubt the DS would be good
>enough.

Er, somehow I don't quite see the game working on the PSP. I think the matter of having to play using the analouge stick or the Dpad might be a tad frustrating. Given that the DS has the touch screen however, it probably could work quite effectively. Plus I think the hardware itself could probably handle maybe a slightly scale down version of the game.

Joji 23 Jun 2004 18:18
6/6
I agree with you Kami. The touch screen and stylus make DS perfect for games like C&C. Even if it was the old original version I'd be happy with that. I'd be surprised if EA didn't exploit this possibility, before someone else gets there first. Games like this could become vital for the DS, and the wi-fi aspect would really take it to a new level.

PSP could most likely handle better graphics and sound, but the interface would not be up to scratch. Speed is vital to play C&C effectively, and the DS stylus and screen would surely have no problem here.
Posting of new comments is now locked for this page.