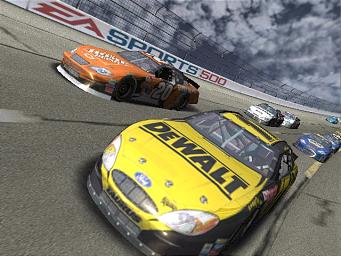 NASCAR Thunder 2004
All Images (5) »
For anyone who?s ever played videogames on a massive telly or projector screen, the sentiment is always the same ? bigger is better. That?s why the upcoming Maxgames videogame tournament in San Jose, California, is going to be a genuinely awesome spectacle. The organisers are displaying games on a 40? by 60? IMAX Giant Dome Screen, and pumping the in-game audio through 44 speakers.

If you happen to be in the vicinity of the Tech Museum in San Jose on July 23, you could do a lot worse than popping in and having a look at what is, quite literally, the biggest event in gaming.
Games: Dance Dance Revolution Max 2 Downhill Domination Halo: Combat Evolved Mario Kart Double Dash!! NASCAR Thunder 2004 Super Monkey Ball 2 Super Smash Bros. Melee Tony Hawk's Pro Skater 4

Alan is my first name 22 Jun 2004 15:12
1/5
For any of you who have not seen the screen itself (which should have been the picture that go alongside the headline), I have to tell you...imagine playing Smash Brothers or DDR on a screen about the size of a basic two story house.

>For any of you who have not seen the screen
>itself

Bigger is better, within limits. But having to swivel your head like you're watching a tennis match isn't going to help anyones play.

>You really don't have to swivel your head. You
>can see everthing from pretty much any seat in
>the theater.

I've seen movies on IMAX many times. But my perception of the situation would be that to concentrate on a specific part of the screen, that moves you would have to move your head.

Anyone actually played games on IMAX?

It's not actually that easy technically, because IMAX uses 35mm (and maybe 70mm) film spooled horizontally, to allow bigger frame sizes. It's not typically a digital projection.