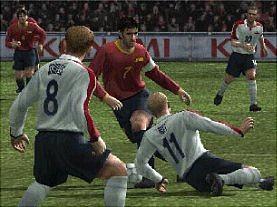 Shot from PES4
In 2001, shortly after the launch of the now legendary Pro Evolution Soccer series, the Federation Francaise de Football (the French Football Federation to the English-speaking layman) accused Konami of assorted copyright infringements, and attempted to place a ban on the sale of the game. Apparently, PES had incorporated player names, likenesses and strips without full authorisation.

Last week, however, a judge declared that no such violation had taken place, and that Konami could distribute its wares all over France without fear of legal reprisal. Konami went on to prove its righteous stance further by accusing the FFF of breaking anti-monopoly laws. By granting the licensing rights for France's national team exclusively to France Football Promotion, there had been little scope for fair competition in what is one of the biggest European videogame markets. More to the point, there are thousands of game-playing French football fanatics who have been denied one of the greatest football games ever made: the freedom to play Pro Evolution Soccer should in reality be a fundamental human right.

Regardless of the legal position, Konami deserves a pat on the back and a juicy half-time orange for beating the French Football Federation so squarely. If it could go a step further and reduce Zidane's dead ball skill stats - in real life as well as in the game - then it would get even more praise, especially from us English types. No doubt once Pro Evolution Soccer 4 has been released this autumn, its sheer quality and entirely deserved reputation should ensure that Konami gets its just desserts in France, in the UK, and beyond.
Companies: Konami
Games: Pro Evolution Soccer