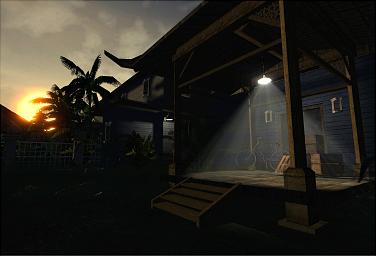 As promised, Ubisoft has confirmed that extra downloadable content for the Xbox version of Pandora Tomorrow is now available. There are two new levels, both of which can be used during Live! play, which might just give newcomers a chance to compete against veteran Sam Fishers on a slightly more even footing. Alternatively, they might simply provide a different backdrop within which to get beaten in an embarrassing and humiliating fashion.

The first of these new levels is set in the Federal Reserve Bank, where a trove of gold and secret government documents await discovery behind a heavily-armoured door.

The second level is River City Mall, set in a mall in a city, which we have deduced must reside near or on a river. The numerous shops and security systems ought to provide plenty of challenge, adding even more to what is already a more than competent title.

The downside, however, is that these extra levels are classed as 'premium content'. That means players will actually have to hand over money for the privilege. Tsk!

In related news, word reaches us of a Splinter Cell mini-game dubbed Late Home, which can be found at www.splintercell.com/uk/latehome. Late Home is free to download - it just requires a Flash player to enjoy it. Here's to good stealth!
Companies: Ubisoft
Games: Tom Clancy's Splinter Cell: Pandora Tomorrow