Latest on the game/film saga inside. 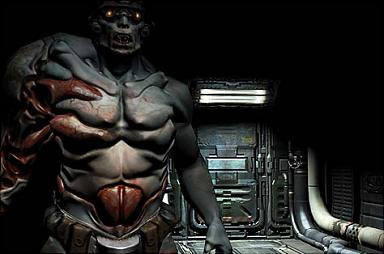 Built like a brick shithouse, steely gaze, not had a decent gig for a while - Ray Liotta!
As you may recall, one of the many games to have its rights hawked to the movie industry is id Software?s leading Doom franchise, placed with Warner Bros a year and a half ago.

However, it has come to light this morning that although a full script had been written and preliminary castings completed, WB has rejected the brand, with id now placing it with Universal, according to reports in Variety and the Hollywood Reporter.

Both publications also report that Lorenzo di Bonaventura and John Wells are set to produce the Doom movie under the direction of Scott Stuber, Universal's vice chairman of worldwide production.

Interestingly, id frontman Todd Hollenshead offers a different story. Speaking of the movie rights he said, ?We remain a 'free agent' at this time and multiple studios are interested in the project. The studio question at this point primarily involves the financing.?

So according to id, the rights are essentially subject to bidding at present. Perhaps one day, one of these game-to-movie deals will spawn something of interest to gamers. As to whether we?ll see Quake VI on the shelves before Doom: The Movie remains to be seen.
Companies: id Software
People: Todd Hollenshead
Games: Doom

Joji 7 Jun 2004 12:11
1/4
Blimey. This film has been bouncing around the Hollywood for ages now, I'm surprised they haven't binned it, since there are better games to turn into a films than Doom. Bloody Warner Brothers again, do they have a clue about this industry. After Enter The Matrix I doubt it. Fools

>there are better games
>to turn into a films than Doom.

Doom would make a great game. It has a story (wander round, shoot things), great characters (I never bothered to learn their real names (which would have involved rtfm) so I named cool things like Mr Stompy, and FLoaty Head), and lots of violence. All it would require was lashing of gratuitous sex, and it would be better even than "House of the Dead".

Anyway i agree with joji about a doom film. i have never been interested in the doom series and even with a nice looking game i still won't buy it, i get bored of dark monster games. A film would interest me but it has no story compared to say Half life, now that would be an excellent movie.

>would make a great game? i think your confused.

And I think you're having difficulty identifying Irony.

You aren't 'Merkan by any chance are you?