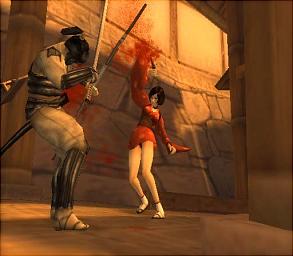 Red Ninja
All Images (6) »
Vivendi Universal has been a troubled company since the dissolution of the NBC Universal deal. Due to the massive debt incurred by the break up, VU Games has had to struggle even harder to justify its losses. Financial results last week revealed that the Interactive division was, in fact, sustaining heavier losses than it did last year. That does not bode well for the future of the company.

However, VU Games is calling 2004 a transitional year, one where it hopes to get the books back on track. Half-Life 2, still pencilled in for release this summer, will go some way towards achieving that goal. However, beyond that, it is difficult to predict how dramatic a transition VUG can make. To pre-empt such concerns, Vivendi Universal has released a full Christmas schedule, just to show that the potential for profitability is there. Quite apart from these, there are also the impressive Chronicles Of Riddick and the surefooted World Of Warcraft hitting the shelves over the coming sunny months.

The Q4 release list, for the benefit of overly-organised Christmas shopping pedants, Santa?s elves and stern-browed Vivendi Universal directors, is as follows: