Army Men is Back!

Take 2 Interactive rescue the Green and the Tan from 3DO skip. 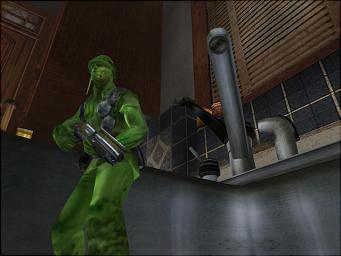 All Images (9) »
We really, really thought that, with the demise of 3DO a couple of years ago, we had seen the last of Sarge and his seemingly endless parade of Army Men, but we were very wrong. Longtime readers of SPOnG will know that we kinda dug the early games in the series - Air Assault, Operation Meltdown et al - but soon became disillusioned by 3DO's constant rehashing of tired old themes. Even the facelift given by the arrival of the PS2 games couldn't persuade us to take them to our collective heart. Maybe absence really does make the heart grow fonder though, 'cos there were smiles galore here when today, Take 2 recently announced plans to release Army Men: Sarge's War this year on PS2, PC and Xbox.

Sarge's War was originally announced for a GameCube release in 2002, but following the protracted collapse of 3DO, never got as far as taking up shelf space. Now, just when we least expect it, it's on its way! You'll have to wait until July to get your hands on Sarge's Heroes, but we can bring you a whole bunch of new artwork and screenshots to get emotional over, so fill your boots.
Companies: 3DO Studios Take 2
Games: Army Men: Sarge's War

mrnull 27 May 2004 16:44
1/6
It makes me worry that so many of these released screens look as if they've been ripped from a CGI miniscene. The two that don't seem kind of... blah. Everyone's jumped on the FPS bandwagon (Kiss: Psyco Circus, Conker: Live and Reloaded, Ecks vs Severr) and unless the Army Man series brings something innovative to the battlefield, I can't see it shining.

Although PC, XBox, and PS2 all have online play options.

This posed in-game stuff brings up an interesting discussion that's cropped up in Develop magazine ( http://developmag.com ). Recently there have been a few articles espousing the need for developers to produce quality, compelling screenshots from their games to provide to publishers for PR purposes. Specifically the authors believe that the shots should say as much about the game as possible, and every devleoper should include a roaming camera, pause and single-step facilities to capture that perfect shot. Initially I was with them all the way until I realise that by doing this they were missing the signle most important quality they were aiming to convey - describing the game itself.

Take a look at Rockstar's GTA3 and GTA:VC PR shots. They're all posed and very, very few convey the thrill of the game. Art shots with a bunch of hood loitering around their ride. Protagonist standing on street corner as cars pass by. All nice and hires, but they say sqaut about the game.

I'm all for in-game action shots, and that's why we'll always try to grab our own screens on SPOnG.

My condolences to those involved and their families.

Joji 27 May 2004 21:35
5/6
You gotta admire their strategic, and military like persistence, cause these soldiers ain't gonna die, til they complete their mission of getting into your console. 3DO has bit the dust after drowning in Trip Hawkins's tripe and all the unsold copies of Army Men.

Army Men is a good lesson in bad game design. If it doesn't sell twice, it certainly won't sell four to six versions later. You would have thought 3DO would have learned from the fact folk prefer other games, that they should have quit national service, and tried something else. What's wrong with the design? Well I reckon it aiming at the wrong market, which is young american kids who played with green army men. People who once played with army men as kids are now old, and want the stealth of Deus Ex and the blood and gore of Unreal, also green army men don't bleed red.
You can't really sell green unless you're the Hulk.

Think it's time to invite next doors dog round our house, to chew and trample them, and I'll perform a military burial with a nice ketchup bath.

"This week I is most playing":

Maybe it's 3DO's lack of good mascots that forces them back to this franchise time and time again.
Posting of new comments is now locked for this page.