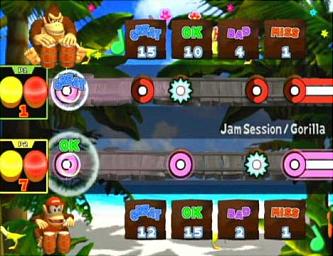 All Images (3) »
Nintendo Europe has today revealed the official list of tunes that it intends to bundle with the forthcoming Euro release of Namco's flam-tastic Donkey Konga. According to Nintendo Europe's website, the playlist is unique and targeted to appeal specifically to Europeans - a statement that appears to have been justified by the inclusion of a few British bands.

The official playlist only included the track titles so, being the great guys and gals we are here at SPOnG, we've done our best to dig deeper and/or blindly guess in order to bring you info on artists/bands as well.

The list has not been fully finalised yet, but it should go a little something like this:


Lady Marmalade - Labelle or Christina Aguilera + Pink + Some other bird

Canned Heat - Jamiroquai, unless it's the band Canned Heat with something like 'On the Road Again', which would be better

The Locomotion - Little Eva or Kylie (most probably the latter)

Dancing In The Street - Martha and the Vandellas or Bowie + Jagger

Sing, Sing, Sing (With A Swing) - We can only imagine it's Benny Goodman and his Orchestra?

The Impressions That I Get - Mighty Mighty Bosstones

Back For Good - Take That


Donkey Konga, complete with the amazing set of simian bongos, is due to hit European shelves on October 15th - we can hardly wait!

Yeah, who said Nintendo needed RARE to make a decent DK title... every forum user here. As much as I'd like to see a next-gen primate platformer, this game is getting better and better the more I hear. I can only hope that us kids in America don't get a specially focused track listing. Nelly and Blink 182 have already killed my radio. My games are my last bastion of hope!

anyway, i really do hope that "99 red ballons" is the goldfinger version, although, i dont think it is ;_;.

Joji 27 May 2004 20:35
6/9
A case of some parts working and others not. Nice to see it coming to europe in the first place. And if you want the jap version you can have that on import( via freeloader) then have two bongo drums and diiferent two versions of the game. A much better option I'm sure you'll agree.

Just make sure you have to different versions of the game save on two different memory card.
Mixing them may reformat your card to a japanese one.

Alan is my first name 27 May 2004 21:05
7/9
You crazy Europeans get the better soundtrack between the American and overseas version.

You also get topless women running around for no particular reason.

...at least that's what they tell me.

>kids in America don't get a specially focused
>track listing.

We're the kids in America, woh-oh. You are Kim Wilde and i claim my free packet of seed

SilverDogg 28 May 2004 17:17
9/9
heh, i am gonna import the japanese game. it kicks ass =). im also gonna buy the american version and the european version. why so many you ask? well, they all have different songs =). then ill have to buy three different versions of dk2 aswell. yehaw!
Posting of new comments is now locked for this page.