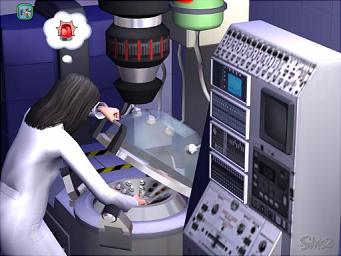 The Sims 2
All Images (5) »
Well, the dust has finally settled from the E3 madness and the industry is getting back down to business. To kick things off, the Games Critic's Best of E3 Awards nominees have been announced. Based on the opinion of 35 editorial folk from publications such as Time, the LA Times and CNN, it's a fairly US-centric verdict, but that's just the way the world works.

The nominations for the assorted categories are as follows:


On the games front, Halo 2 stands a good chance of winning this category. Half-Life 2 was game-of-the-show last year, so it would be unlikely to win again. Perhaps the DS will take the accolade, having surprised many with its intriguing new concepts.


If this was the award for the most original game, Donkey Konga would storm it. However, the best original game is more difficult to judge, though it would be a surprise if Odama's military themed pinball action could outshine God Of War or Jade Empire.


The best PC nominees manage to span a healthy cross-genre selection. Half-Life 2 is a fantastic FPS, Rome: Total War an awesome RTS, and Splinter Cell 3 is a true graphical delight. This could be a keenly disputed category, depending on each judge's favourite type of game.


Metroid Prime 2 and Halo 2 are follow-ups to two of the most critically acclaimed console games ever made and they are both undeniably impressive. However, Resident Evil 4 deserves recognition for putting the series back up where it belongs, and God Of War and Jade Empire are new, original titles: so again, this will be a hotly contested category.


It's been an excellent E3 for hardware-related revelations. Ordinarily, the Donkey Konga bongos would take the prize, but with three new consoles, the stakes have been upped. The Phantom managed to silence the cynics, the PSP showed its worth, and Nintendo excited onlookers with its innovative DS.


Largely fuelled by sequels, this category still manages to shine brightly. To be frank, the result might as well be a five-way tie.


It's not been the best year for fighting fans, so it's not the highest calibre of nominees here. Def Jam's wrestling rappers and Rumble Roses' writhing lady mud wrestlers probably don't deserve serious consideration, meaning Capcom could emerge victorious. Xbox Live!-Enabled SF2 Anniversary Edition is a glorious prospect for the 2D hardcore.


There was a massive multiple of RPGs on display at this year's E3 - some good and some bad. These nominees represent the best of the genre and each will have their own unique qualities. Peter Molyneux's Fable probably has the edge, though.


With a Burnout and a Gran Turismo game in the running, the other titles won't get much of a look in. Forza Motorsport was a pleasant surprise, but is unlikely to have out-performed GT4 in the eyes of the judges.


This is a slightly shaky category, bearing in mind that some are not serious simulators at all. Trying to compare The Movies to Full Spectrum Warrior must be a tricky task. It all just seems so random.


With two NFL games nominated, the probability is that one of these will take the trophy. More input from European judges would probably have offered a more interesting selection.

Both RTW and Warhammer 40,000 flexed impressive graphical muscle, but Pikmin 2 made us smile. Total War, however, is the strongest contender in this field: strategy fans hold the series in very high esteem.


This category is packed with some of the most original games seen for quite some time, and despite the name of this award, only the 'parlour' bit seems to fit. There's not a puzzle or trivia question anywhere to be seen. In fact, apart from Wario Ware DS, these are all 'physical' games.

Good to see Destroy All Humans. Looks a blast. Kinda makes me thing of Paradriod with aliens and the ability to cruels things to your occupant.

Karaoke Revolution looks a laugh. None of the SPOnG pissups have ever encountered a karaoke machine, so nobody here knows I'm a gnat's cock hair from international playboy status.

Pikmin2 - Woot - but I never even played the first one despite my wife bundling it with the Gamecube she got me a coupla Chrimbo's ago ( before offspring forced us into the land of extended mortgages :) Loved the game when played in the office - just coudn't get my arse into it at home. Instead I wasted my time on the half-baked spawn of Rare, Starfox Adventures. What a fool I am.

Burnout3 - hope it's better than 2, otherwise it's a waster.

Alan is my first name 26 May 2004 23:23
2/2
I tend to notice that most after E3 best of articles are amongst the most ignorant things man can read. Rearely do I find one that isn't all Sony, all Microsoft, or all Nintendo. And the bigger sites tend to put all one company while just letting some of the biggest titles from the other main guys wins a catagory, simply because it's cool to like Resident Evil or Halo or whatever.

And did I read corretly that Paper Mario 2 was not on this list, but yet Vampire: The Masquerade Bloodlines was?