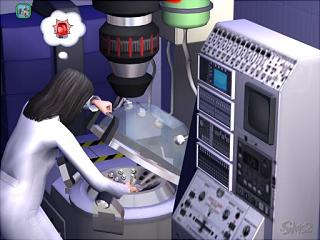 It's that Big Brother time of year again. The season where people enjoy watching other people wander around doing random chores and assorted mundane activities is upon us. Hence EA has delivered a few more screenshots from The Sims 2, which show avatars pottering around doing stuff.

These images would suggest that the Sims sequel has undergone heavy hormone treatment, with characters getting down to business in their beds, by the pool and in the street. There is also a strange leaning towards scientific endeavours, with thrilling screens of people in white coats using laboratory equipment.

Apart from more detailed graphics and more realistic character behaviour, the general theme will be much the same as the original. Presumably there will also be a raft of expansion packs following the game's official release this September.
Companies: Electronic Arts
Games: The Sims 2