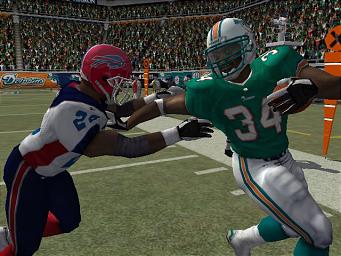 All Images (2) »
Yesterday's NFL exclusivity deal purported to be on the cards at EA has been rubbished by the publisher we can reveal today.

As you will be aware, The Sports Business Journal reported recently that EA is in talks - which were said to be close to completion - with Players Inc, the NFL Players' Association marketing arm, to exclusively license the rights to all NFL player rights for the next four years.

It stated that the publisher will pay an incredible $250 million each year.

However, responding to us this morning, EA UK spokesman Glen O?Connell said, ?The story published in Sports Business Journal includes some serious errors related to agreements between EA and it's partners. The financials reported in the story are incorrect by an order of magnitude and the NFL Players Association has contacted the publisher to request a correction. No further details will be released."