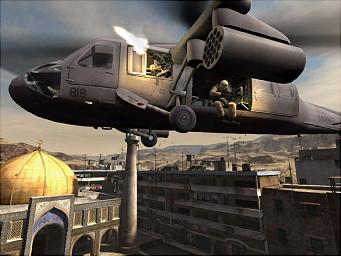 All Images (4) »
It is impossible to contest the fact that Digital Illusions? new Battlefield 2 game looks utterly spectacular. The fact that it will support a multiplayer mode for over 100 players is equally impressive. Ethically, however, Battlefield 2 is about as sensitive as ton of armour-plated rubble. The idea of a super-realistic battlefield simulator featuring the US army and set in the modern-day Middle East is extraordinarily dark given the current geopolitical climate.

This will pose a difficult dilemma for tree-hugging gamers all over the world. Battlefield 2 will be a benchmark in multiplayer gaming and is overloaded with graphical treats of the highest order. Reviews will most likely read, ?You must play this game!? Indeed, if it is this realistic, then even pacifists might wish to experience the game in an educational context, in order to enrich and inform their empathetic understanding of war in the Middle East.

Just remember, Battlefield 2 is only a game, despite what these screens might suggest.
Companies: Digital Illusions Electronic Arts
Games: Battlefield 2