Another FPS on the horizon. 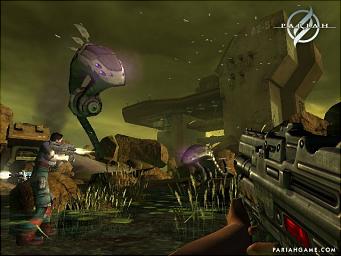 All Images (3) »
Very little has previously been revealed about Pariah (due for release on PC and Xbox next year) aside from the fact that it would be loosely related to Unreal technology. Now Digital Extremes has leaked out a few more details for the fact-finding fiends at E3. Given its affiliation to Unreal, it was fairly blatant that this would be a first person shooter, but recent revelations have been equally obvious, in a slightly tired and clichéd fashion.

Set in the distant future, Pariah’s storyline is hardly revolutionary. Dr. Jack Mason gets stranded on Earth only 16 hours before a catastrophe of apocalyptic proportions is set to occur. So begins his plight to escape this dark future environment by killing anything stupid enough to get in his way. If the enemies’ squad-based AI principles are as intelligent as Digital Extremes would like us to think, then that could still prove an engaging challenge.

Pariah will include driveable vehicles, multiplayer modes and upgradeable weapons. To be fair, anything less than that would appal FPS veterans whose E3 2004 experiences must already have them trembling with excitement, in anticipation of Half-Life 2, Halo 2 etc. But if the heavily modified Unreal engine, backed up by Havok physics, can impress players with its technical prowess alone, then it might still manage to garner a warm reception.
Companies: Digital Extremes
Games: Pariah