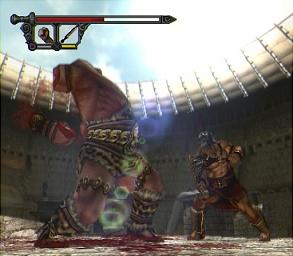 All Images (4) »
In a conference dominated by sequels, revivals and movie licenses, Capcom?s totally new game, Shadow Of Rome, stood out from the crowd like a Christian in a lion?s den. Packed with all the stalwart features that make up any decent third person adventure, Shadow of Rome was absolutely dripping atmosphere. Ever since that Russell Crowe movie, gamers have been pining for some hardcore gladiatorial combat .

In the playable demo at E3, the gladiator level looked pretty much spot on. The character (Agrippa) steps out from the ?waiting room? (y?know, where Oliver Reed does that pep-talk thing in Gladiator) into the arena to be greeted by a cheering/jeering crowd, and a big scrap ensues. Apart from the ability to knock away or grab your opponent?s weapons, Agrippa can also appeal to the crowd. As the player struts around, pumping his fist in the air, the spectators will react by cheering and throwing you useful bits of weaponry with which to crack skulls.

From another angle, Shadow of Rome demonstrated a good-looking stealth-based level (no surprises there). The other playable character (Octavianus) was seen creeping around a senator?s villa in order to steal a set of robes. Strange folk, these Romans...

If the complete game delivers what this demo suggests, Shadow Of Rome will be a Capcom classic.
Companies: Capcom
Games: Shadow of Rome