Plenty of variety on offer this year. 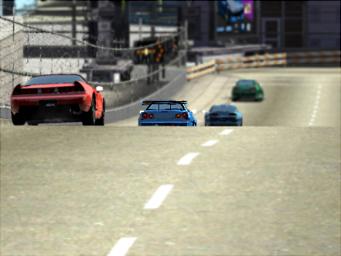 Juiced
All Images (5) »
Dark comic characters, wrestlers, sports stars, race drivers and soldiers will all get their chance to shine in one of the following releases. Combat Elite and Juiced look decent enough, but 100 Bullets and The Red Star will be the titles that offer the most potential and, as such, receive the bulk of the E3 coverage.


100 Bullets [PS2, Xbox]
Based on Brian Azzarello's popular comic of the same name, 100 Bullets is already looking impressive. The player starts off with a briefcase containing information about a crime and whom the perpetrator was. This case also holds a gun with which to kill that perpetrator. So begins a brutal, and rather flashy, third-person action adventure.

All-Star Baseball 2005 [PS2, Xbox]
A baseball game where we're all stars? Peter Andre, now's your chance! Seriously though, this is actually a baseball game that replaces the ball with a star, thus complely changing the physics of the game. No, not really? All-Star Baseball 2005 is simply a sober simulation of the sport. According to people who know about this sort of thing, it's actually one of the best.

Legends Of Wrestling: Showdown [PS2, Xbox]
Another wrestling game, this time featuring over 70 'legendary' spandex-clad pantomime gymnasts. It's a mystery as to how 70 separate people have managed to achieve the status of 'legendary wrestler', but allegedly they have.

Juiced [PS2, Xbox, PC]
This will be sat at the traffic lights alongside Burnout 3, Street Racing Syndicate and Need For Speed Underground 2, and so will need to rev its engine VERY LOUDLY in order to make its presence felt. The ability to customise your vehicle to within an inch of its life and to burst eyeballs with excessive motion blur effects are no longer enough to make a racing title stand out on a congested shelf.

The Red Star [PS2, Xbox]
The second of Acclaim's comic inspired titles, Red Star is set in an alternative Russia where the Cold War had been about magic rather than missiles. Gameplay-wise it's set to be a throwback to the classic scrolling beat 'em up, with lush visuals bringing the experience up-to-date. RS could make for a refreshing break from the norm.

World Championship Rugby [PS2, Xbox, PC]
It's a bit like American football but without all that cowardly padding. Apparently England is very good at it, so it will probably sell well here, regardless of quality.