Something old, something new and something blue (and spiky) 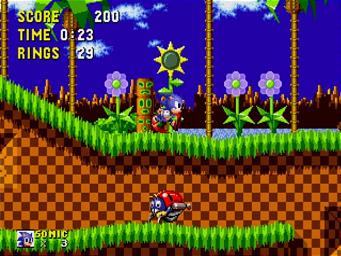 Sonic Mega Collection (GC)
All Images (13) »
Sega has promised the world an "explosive" announcement in LA this week. Dubbed 'Segaton', what will actually be said is still a complete mystery. The general belief amongst the gaming press is that this will involve PCs and online things... Hmmm. Looking at the confirmed list of PC games on show, it's hard to envisage anything too dramatic. There are two sports management games, one old Sonic game and a new Worms outing. None of the above could accurately be deemed "explosive", so 'Segaton' must be something completely different?


Altered Beast [PS2]
A revision of the age-old, side-scrolling beast-em-up that will revive the original storyline in which "in order to overcome evil, you must become more than evil". It's impossible not to approve.

Astroboy [PS2]
This franchise has quite a following in Japan. It involves a small robotic child flying around in a pair of pants, performing all manner of amazing astral activity. Recreated by Sonic Team, Astroboy should provide some quality, no-frills entertainment.

Blood Will Tell [PS2]
BWT is also based on a popular Manga franchise, this time revolving around the trials and tribulations of a mutilated samurai. With body parts replaced by menacing weapons, the adventure begins.

Football Manager 2005 [PC]
A self-explanatory title really, under development by the ex-Championship Manager guys, Sports Interactive. It's safe to say there is plenty of scope for interesting revelations regarding online play and how (or if) Sega proposes to link together its various sports titles (as Microsoft and EA have done).

Headhunter: Redemption [PS2, Xbox]
Jack Wade returns for more dark future action-adventuring. The original was fairly well received and, if Redemption can improve on that, it should be a worthwhile romp for both fans and newcomers.

Otogi 2 [Xbox]
Otogi was an exemplary 3D action title. Overstated, brash weaponry, impressive special effects and a steady stream of demons stepping up for slaughter are all welcome ingredients.

OutRun2 [Xbox]
Yup? we told you so. Outrun 2 is coming to an Xbox near you? and it won't just be a straight arcade conversion, it will also be granted Live compatibility.

Sega Superstars [PS2]
This should be an interesting one. Making use of the EyeToy, Sega will be introducing Sonic and co to the delicious concept of playing games by waving your arms about. With Sonic Team's involvement, this should be a corker.

Sonic Mega Collection Plus [PS2]
This collection will be similar to the GameCube version, except 'plus' some extra features like movies and comic covers. Retro fans can choose from Sonic The Hedgehog 1, 2 & 3, Sonic & Knuckles, Dr. Robotnik's Mean Bean Machine and several other bits and pieces.

Spikeout Battle Street [Xbox]
This isn't a volleyball game as several people have suggested. It's actually a 3D beat 'em up with Live co-op play for the broadband-enhanced.

Warhammer Online [PC]
Warhammer Online is a MMORPG set within the Warhammer world. All the usual fantasy RPG elements will be included and there's also the distinct possibility that this could be related to Sega's yet-to-be announced announcement.

Worms: Forts Under Siege [PS2, Xbox, PC]
Expanding on the long-standing tradition of that trademark Worms gameplay, Forts Under Siege will be boldly defending its right to provide simple and amusing multiplayer frolics to the masses. Quite right too.