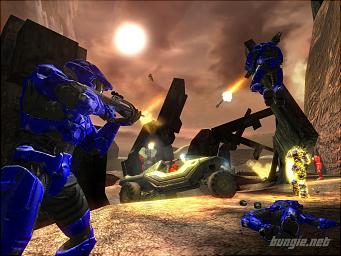 All Images (7) »
Rightly or wrongly, Halo 2 will be the most talked about console game this year, despite the fact that it was initially due for release last year. After the runaway success of the Xbox launch title, Microsoft Game Studios knows full well that nearly everyone with the correct console will be purchasing the sequel. Now that the launch has been fixed for 9th November (2004, no less!) we can also expect Santa's little helpers to be organising several thousand sled's worth of the Xbox uber-sequel.

Halo 2 will be packed full of new weapons, vehicles, damage mechanics and various other neat little touches. The most important addition will be the inclusion of Xbox Live play, which will likely make Halo 2 the most widely played online console game in the history of humanity. The other guarantee is that Halo 2 will be hyped to quite ridiculous proportions. Indeed, Peter Moore (MS bigwig) has already admitted that the game's public launch will be of a preposterously large scale... and given that he's already boasting a (henna) tattoo of Halo 2's release date on his arm, we'd be inclined to believe that entirely.

Demonstrating the game at Microsoft's Pre-E3 Conference a few hours ago, Bungie's Joe Staton and Max Hoberman took to the stage to take part in a brief networked multiplayer romp, set in an expansive and highly-detailed level entitled 'Zanzibar'. Showcased during the fairly short stint was the game's rather smart dual weapon system, the appearance of destructible vehicles and, more importantly, a refresh rate delivering a steady 60 frames per second.

A great deal will undoubtedly be uncovered about this exciting title over the next couple of days - we'll bring you as much as we can.
Companies: Bungie Microsoft
Games: Halo 2 Halo: Combat Evolved