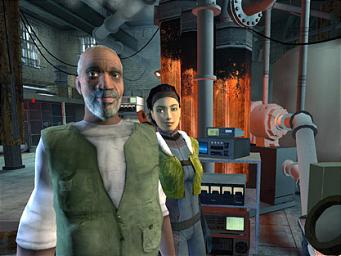 Half-Life 2
All Images (15) »
An extensive and diverse roster on offer from the chaps at Vivendi, combining an attractive selection of original offerings, licences and sequels. Oh, and of course the recently confirmed (for real this time) Half-Life 2, which will undoubtedly end up the star of the show for the second year running.

The Chronicles Of Riddick: Escape From Butcher Bay [Xbox]
Despite being rooted in the forthcoming Vin Diesel movie, this FPS-RPG seems surprisingly sophisticated at first glances. We'll know for sure when the game is fully unveiled.

Crash Bandicoot Unlimited [PS2, Xbox]
Also known as Crash Twinsanity in North America, this promises a new Crash Bandicoot gameplay mechanic. If words like 'zany', 'crazy' and 'wacky' get your pulse racing, CBU may be of interest.

Empire Earth 2 [PC]
The original Empire Earth (2001) was rightly praised for its expansive and varied approach to the strategy genre. If this sequel can deliver more of the same with even greater depth, then this could be another life-sapping epic.

Evil Genius [PC]
Any game that puts you in the shoes of a criminal mastermind/comedy Bond villain is going to gain favour without much difficulty. From deep inside a secret underground fortress the player can bark order at minions whilst torturing information from fearless 00 agents. Providing that the humour rests in the gameplay, rather than just the script, this could be something very special.

Fahrenheit [PS2, PC]
Another member of the quickly expanding psychological-horror genre, the key concept in Fahrenheit is the ability to play from two contradictory perspectives. Choosing between 'hunter' and 'hunted', the player will have to negotiate the streets of New York amidst an atmosphere of cultish genocide. Scary.

Fight Club [PS2, Xbox]
It's been five years since Fight Club was released in the cinemas, so this franchise might be less marketing-orientated than the standard game-of-the-film formula. Thanks to Live! Enabled play, Fight Club will also have a welcome online mode. This could prove for some authentically desperate scraps between angry, bare-chested office workers all over the world.

Ground Control II: Operation Exodus [PC]
A sci-fi themed RTS: due for release in the next couple of months.

Half-Life 2 [PC]
Valve showed this off at last year's E3 in a purpose built amphitheatre. Not long after, some pesky pirate hacked into and stole the game. Having resolved these security issues, the game should now be ready for release this summer.

Men Of Valor [Xbox, PC]
Essentially a Vietnam-themed answer to the Medal Of Honour series, this should be a decent, if predictably 'gritty' FPS.

Predator: Concrete Jungle [PS2, Xbox]
Developed by Eurocom, this will be the Predator's first hunting expedition for PS2 and Xbox. Expect gameplay to involve stealth, assassinations and free-for-all fire fights. Partly set in 1930, and partly set in 2030, PCJ should offer a solid, varied gaming experience.

Red Ninja: End Of Honour [PS2, Xbox]
Another 3D action adventure ninja beat 'em up. Despite the title, the martial arts style practised by the red ninja seems perfectly honourable - as yet, there has been no sign of hair-pulling, shin-kicking or ghoulie-squeezing. We can but hope.

Spyro: A Hero's Tail [PS2, Xbox, GC]
'A Hero's Tail is the best Spyro game yet' boasts the Vivendi press release. They would say that though, wouldn't they?

Starcraft: Ghost [PS2, Xbox, GC]
Potentially one of Vivendi's biggest games, the hype surrounding this one has so far been carefully refined... It's not an FPS, it's a unique 'tactical-action console game'.

Tribes: Vengeance [PC]
Offering more Unreal-powered online multiplayer mayhem, Vengeance follows the logical evolution of the Tribes franchise. Great care has also been taken to make sure that this version can be more easily customised by the modding community.

Van Helsing [PS2, Xbox, GBA]
It's based on a movie, so therefore it must be some kind of 3rd person action adventure, featuring the characters and backdrops from the film.