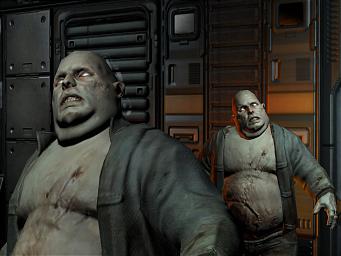 Doom III
All Images (5) »
For PC gamers, the Activision stand will be the place to be at E3. FPS doting trigger loons will be dribbling and retching at the sights and sounds of Doom III, whilst those mild mannered, bespectacled RTS gents discuss the finer historical truisms of Rome: Total War over port and cigars. Aside from these, there?ll be a fairly eclectic mix of material, as you will discover by casting a glance at the words below...

Call of Duty: United Offensive
Activision?s unpleasantly realistic World War 2 shooter will be returning for more of the same moody gunplay. The most notable improvement over previous COD games will be the enhanced multiplayer features.

Doom III
Demonstrating ID Software?s new graphics engine, there is an optimistic air surrounding this long-awaited title. If the demonic hell-spawns of Martian origin are as evil as Activision would have us believe, then this could also be the most frightening game at E3 (assuming that you find demonic hell-spawns frightening, which you probably don?t).

Dreamworks? Shark Tale
Based on the movie of the same name, Shark Tale documents the life and trials of a fish blessed with the gift of the gab. Apparently, this is all achieved in an ?urban? hip-hop stylee. Strange but true.

Lemony Snicket?s A Series of Unfortunate Events
To suggest that this game involves anything more than a series of unfortunate events would be foolish. However, in the world of video games, unfortunate events are the mainstay of everyday life. We?re all shot at, knocked over by cars, attacked by mecha-camels and decapitated on a regular basis. So what we have here will probably be more a series of slightly irritating incidents that you ordinarily wouldn?t mention.

Rome: Total War
Creative Assembly has already set the highest standards for RTS titles with their previous Total War games. If this Roman-based sequel can improve on those, then this will be an impressive achievement.

Spider-man 2
Another Spider-man title was always on the cards, not least because Spidey?s wall-crawling and web-swinging shenanigans make such an excellent premise. If it fulfils its potential this time round, that would be a truly great thing.

Vampire: The Masquerade - Bloodlines
Using Valve?s Source technology (of Half-Life 2 fame), Bloodlines will tread that fine line between RPG and FPS. With a variety of vampire clans available to the player, and a contemporary L.A. backdrop, this could prove to be something a little different.

X-Men Legends
Finally, the X-Men name has been granted an unusual twist. Legends will be an action RPG that allows you to customise your mutants as you deem fit. If this proves that Marvel licenses can successfully incorporate stuff other than 3D-action fighting/platforming, than it could set a welcome precedent.
Companies: Activision Creative Assembly id Software
Games: Call of Duty: United Offensive Doom III Dreamworks' Shark Tale Lemony Snicket's A Series of Unfortunate Events Rome: Total War Spider-Man 2: The Movie Vampire The Masquerade: Bloodlines X-Men Legends