Lovely sorts of death on show. 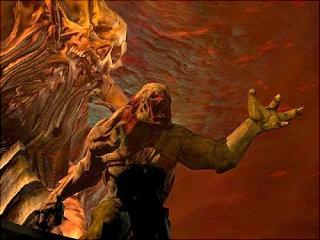 All Images (2) »
Having run out of superlatives with which to describe the recent screenshots from the upcoming Doom III, we'll let these two new Xbox screenshots do the talking...

Oh, alright then. Again, that kooky dog-type creature is the main culprit, this time joined by some kind of hot lava demon. Creepy!

Brown Force 5 May 2004 15:35
2/5
Looks bloody awesome...though I don't mind all these screenshots, I would just prefer an Xbox release date please!
more comments below our sponsor's message

>Dont think that is xbox screens, cus i thught the
>xbox version of the game wasnt going to have the
>self shadowing effect in it (didnt think the xbox
>could do it ne way) and clearly, that top picture
>shows of the self shadowing nicley :)

I'm sure Xbox could do it, but whether it could self-shadow and render out frames at a rate that was considered "playable" is entirely another matter.

EVeryone knows that, for press screen, the developer cranks up the screen res and turns on all bells/whistles prior to frame advancing to the perfect shot :)

what was it one story said? activision were imasculated. hehehe. go spong
Posting of new comments is now locked for this page.