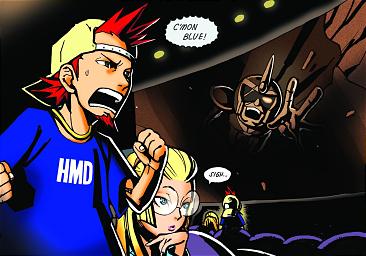 Shot from Viewtiful Joe
Confirming ongoing speculation that has been escalating over the past few weeks, Capcom has revealed that Viewtiful Joe 2, the follow-up to the acclaimed GameCube-exclusive cel-shaded action game from last year, is underway in Japan.

The development started last summer under the watchful eye of creator Atsushi Inaba, and it's good news for the masses as this time, the game will appear on both GameCube and Sony's PlayStation 2, expanding the reach of the artistically important franchise.

The game will see both Joe and girlfriend Silvia playable from the off, in an update featuring 40 new enemies, 'improved' bosses (we thought this was impossible ? curse that shark) and a whole host of new settings, seeing Joe and Silvia in outer space for the first time.

There will also be a two-player co-operative mode, again expanding on a proven formula.

Speaking to GameSpot, Inaba-san made some interesting comments as to the content to found in VJ2. "We heard the game was a bit difficult for casual gamers, so we have made it more accessible to them while still making it challenging enough for hard-core gamers that liked the difficulty of the original," he said.

Although Capcom US has been doling out artwork from the game, our friends at the European office have all assets embargoed until Monday. Check back then for updates.

Pierre Pressure 21 Apr 2004 12:50
1/4
I like Viewtiful Joe very much and anticipate Viewtiful Joe 2 with great excitement. Why not release the premier game on PS2 now

I feel VJ was an experimental type of GC game. It was different, and might not have had much of a chance on the PS2, due to the huge competition on it. Also with Sony getting funny about 2d games like Metal Slug, VJ might have got the same treatment, perhaps be ignored.

I don't think Capcom expected it to be such a smash hit on GC, especially outside of japan.
VJ was a brave chance taken that has paid off. Money well spent indeed.

/me thinks that, deadlines met, he must give it another crack.

QuaiD 21 Apr 2004 18:34
4/4
A PS2 version of the original makes sense. It will give people an idea of what to expect when VJ2 comes out
Posting of new comments is now locked for this page.