Cheaper than a real tattoo. 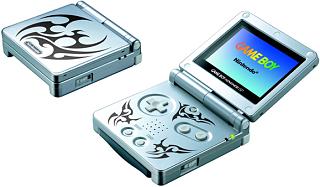 Nintendo announced today that a Tribal Edition of the popular Game Boy Advance will launch across Europe this June. Sporting a design derived from ancient Polynesian and Indian cultures, this model is tattooed on the inside as well as its exterior. While we're waiting to see if there's any real point to this release, let's hand over to Tim Freystedt, European Marketing Manager for GBA. Regarding the new Tribal look, he commented, "We feel we have created a product in the Tribal Edition that reflects the sentiments of today's youth ? rebellion, attractiveness and spirituality. The new console allows gamers to express these emotions in a fun and interactive way, enabling them to communicate their individuality."

Is that the kind of individuality where everyone has a tattoo that looks almost the same as the next person's? Hmm...

Mister Cartoon, tattoo artist for celebrities such as Eminem, 50 Cent, Beyoncé and Justin Timberlake reckons, "The tattoo pattern on the console looks pretty cool. Tattoos are huge at the moment ? everyone wants one. I think the console is great and will be a huge success with the more individual gamer."

Oh well, no matter how badly you treat your handheld - save hitting it with a mallet - at least your Tribal Edition GBA will age gracefully: no unattractive skin-sagging/stretching in older age guaranteed!

The GBA Tribal Edition goes on sale across Europe on June 18, but only for a limited period. Price point is expected to be 129-139 Euros.
Companies: Nintendo
People: Tim Freystedt

Deviluck 19 Apr 2004 14:59
2/7
I agree, they aren't very innovative i suppose. Though what really can you do to sell more of them?
I suggest celebirties, thats the only way. Though that would make the product look cheesy.
more comments below our sponsor's message

They ought to do da-glo GBAs, and matt black ones, and camoflage ones, and sell snap on covers like mobile phones. And chrome ones, and iPod shiny white ones. They should have as many different styles as Swatch has cheap plastic watches. They should make it so everyone has one for every day of the week. Thery should do ones with pictures of topless women, hunky guys. Pictures of fluffy little kittens, with the buttons as their eyes. NES ones, and MegaDrive ones, and Commodore 64-inspired ones. Chocolate ones, that you eat, and then buy another. Scented ones, and metal ones made out of real metal. Jewel Encrusted gold ones with diamond and ruby buttons for Jail-ho and Pee-diddy. They should do leather ones, and suede ones too (like the Nokia 7600). Ones made out of thermal sensitive material that change colour where your hands have been holding them.

Jeez, if they had half a brain they could turn it in to a fashion item sans equal.

PsychoWiLL 19 Apr 2004 22:18
5/7
Yes. You should be able to custom design your SP, for a slightly more exspensive price. That way everyone gets what they want.

QuaiD 19 Apr 2004 23:05
6/7
I like the scratched look, the one that you get with puttiing it in your pocket and taking it out a million times. Cheaper than buying a new one and unique too.

Joji 20 Apr 2004 13:48
7/7
Obvious another chance to push the GBASP more along with the soon to come Famicom/NES version. If the Nitro is due out soon guess they have to perform tricks to sell more GBASPs before the next big price cut. Looks ok though.
Posting of new comments is now locked for this page.