US gets NES Game Boy Advance as Europe holds breath 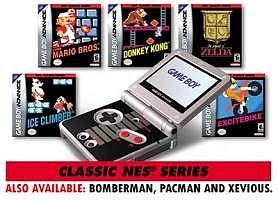 Nintendo America has shown for the first time the fantastically good-looking NES Game Boy Advance SP, the Stateside equivalent of the acclaimed Famicom SP that set retail ablaze across Japan.

The console, which is styled like the beloved NES controller, will be accompanied by eight NES titles: Donkey Kong, Pac-Man, The Legend of Zelda, Super Mario Bros, Excitebike, Ice Climber, Xevious and Bomberman, all priced at $20.

Nintendo was reportedly impressed with the reaction to the Famicom SP to the extent that a global roll-out of a similar device became inevitable. As we reported last week, research at point of sale revealed that many older gamers were more than willing to shell out on a Famicom SP and a range of software to tread the cobbles on memory lane.

More pertinent was the news that many of the buyers were making their first videogames purchase in some time with the FSP, often with a gap of several years between any other games acquisition. Nintendo figured out that if it can reach this lost consumer base, and supply it with its only current hardware unit, untold riches are bound to follow.

No word on a European equivalent at this time, though expect an announcement within the next few weeks.
Companies: Nintendo
Games: Bomberman Donkey Kong Excitebike Ice Climber Legend Of Zelda, The Pac-Man Super Mario Brothers Xevious

Rod Todd 29 Mar 2004 12:16
2/8
Are Nendonti not missing an opportunity here? If the Famicon SP provoked loads of dead gaers to rise from their graves, surely there is an opportunity for a MegaDrive SP. Clearly, only people who feel nostalgic fo rtheir long gone and much loved NES are shelling for a Famicom SP. But what about the hoardes of Sega users, who nevere had a Famicom/NES and don't feel any pangs of longing in their groinal areas?

Surely a GBASP dressed up to look like a MegaDrive controller would entice those lapsed gamers who erred on the side of Sega to pick up the joypad once more.

Indeed, if they dress a GBA up like an Atari 2600 Joystick (black with a single red button, and a bit of rubber tham makes it look like a Hillman Avenger gear-stick) even I might buy one.

Some dude was cooking up a home brew C64 emulator for the GBA, called "Splam!".

A while back he released the SID player portion of the code.

His website (http://splam.emuhq.com/) has been dead for some time now and there's been no replacement put up elsewhere, which is a shame.

almondVanHelsing 29 Mar 2004 17:28
5/8
This is old boring, news. We want more games for our GameCubes, not more and more versions of GBAs with older and older games.

I wonder if Sony will make PSX and PSOne versions of the PSP and put old games on them? I think not.

Joji 29 Mar 2004 18:12
6/8
This SP doesn't look as good as the jap famicom version. All the same it's nice to have the option between the two. All we need now is GBA Metal Slug to get released in U.S & Europe.....bleedin long wait that is gonna be. Most likely never.

A nice, black Sega endorsed SP would be nice, released next to some MS/MD classic ports. Very unlikely though.

Get ya priorities straight Nintendo, we want games, not console cosmetic makeovers.

I think this is stupid. If you want to play these old games then buy a NES for $15 bucks or so from ebay or gamestop. I have a NES and buy old games every now and again just to remember the struggles I went through to beat them, but most of the time no matter what game I get working with the penny trick and they only last about 5 min. These games were cool back in the day because that's all we had.

Alan is my first name 29 Mar 2004 22:29
8/8
In other news, millions of gamers around the nation are experiencing what several witnesses are describing as "impulsive orgasms".

More as it breaks.
Posting of new comments is now locked for this page.