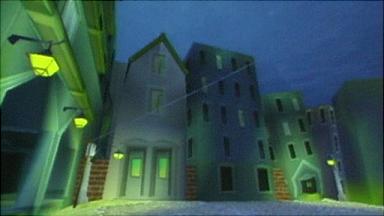 All Images (16) »
Yesterday at the 2004 Game Developer?s Conference in San Jose, CA, Digital Eclipse's Chris Charla unveiled the company's forthcoming Death Jr, the PSP exclusive most likely to be one of the machine?s launch titles. Actual details of the game were pretty scarce but the in-game footage on show did give a good indication of what we can expect from the highly anticipated portable, further supporting Sony's claims of PS2-quality software.

The game takes the form of your average 3D platform adventure, with players taking control of a little grim reaper as he fulfils his usual quota of exploration and combat-based objectives. Speaking of the machine's power, Charla addressed, "Polygon for polygon, PSP has more power than PS2." This is clearly evident from the footage, which appeared comfortably on a par with the latter machine's first-generation offerings. Visual effects were in abundance, with dancing flame effects showering the screen, tracers accentuating the hero's weapon motion, and some impressive lighting further enhancing the game's eerie mood.

Speaking about development issues, Charla stated that, "A huge number of effects that are given to you in software on PS2 are available in hardware on PSP", before going on to add that the company had its first PSP title up and running within two man-weeks, and a PS2 port functioning within four - good news for developers and gamers alike.

We'll be sure to bring you further details as they emerge. In the meantime, check out these images.
Companies: Digital Eclipse Sony
People: Chris Charla
Games: Death Jr.

nolimit966 27 Mar 2004 01:18
3/9
OMG sony is chatting out of its backside again!!!!!!!!!!
They said the PSP was 333MHZ which is more powerfull than the ps2 ALSO i thought it was dual CPU?
Well how come the graphics dont look anything better than a N64?
They are banjo kazooie style polygon graphics and it looks exactly like a N64 game - - -
Well i should never have listened.
I remember sony saying that the ps2 was going to be so powerful it could power a nasa aircraft...LOLOLOL - i have to say though, they are clever at twisting the truth to create a massive hype!

The graphics shown above are very nice indeed, and i am being serious!

If Nintendo's DS does turn out to be movie compatable i AM DEFINATLY getting a Nintendo DS without a Doubt. maybe Portable zelda 64? Portable mario 64? Portable 3D mario kart with wireless link? Maybe even portable goldeneye? Portable final Fantasy? OH YES!!

Deviluck 27 Mar 2004 12:52
4/9
Wow thats very good graphics for a small screen like that. i completely disagree with the Nolimits guy's comment.

The Nintendo will fall, sony will rule, they do it all the time. The PSP is warming up to being one of the best items in this coming few years.

Joji 27 Mar 2004 19:05
5/9
Looks okay for a handheld system, but i'd like to see some screenshots of different PSP games, to be able to judge properly. These graphics in your pocket would be no bad thing, since its gonna be on a compact screen anyway. Strange looking game indeed.

What do you mean exactly? Do you believe that there is a linear relationship between clock cycles and "power"?

>I remember sony saying that the ps2 was going to
>be so powerful it could power a nasa
>aircraft...LOLOLOL -

Yeah, but remember, NASA landed a man on the moon (allegedly) and brought him back (allegedly) using computing power equivalent to a SInclair ZX-80.

> i have to say though, they
>are clever at twisting the truth to create a
>massive hype!

Never, I canot believe you are even suggesting that that might happen in the ethical and consumer-oriented world of computer gaming. It's almost as if large corporations who don't give a damn about games or gamers are using our industry to manipulate their stock prices and create wealth for their shareholders. But that could never happen!

>The graphics shown above are very nice indeed,
>and i am being serious!
>
>If Nintendo's DS does turn out to be movie
>compatable i AM DEFINATLY getting a Nintendo DS
>without a Doubt.

Now wipe yourself clean and wash your hands!