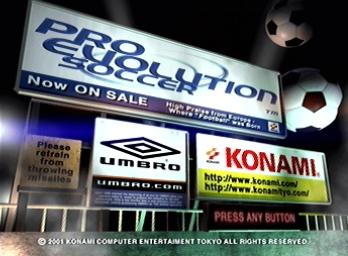 All Images (5) »
Regular readers will remember that we exclusively revealed that a football game from Konami was in the works for Microsoft?s Xbox machine and was slated for release in time for Christmas of this year. At the time, it was unclear as to whether the game would be Pro Evolution Soccer/Winning Eleven incarnation or something completely new.

Well, today the matter has been cleared up, with Konami stating that a version of Pro Evolution Soccer will hit the Xbox this year.

Other details were scant. In a press release containing 370+ words, incredibly no detailed information was revealed, quite an achievement, and perhaps a world record in videogames PR.

However, our source last year did confirm that the game would see full online play, a feature that arguably should have been in place for some time now.

However, fear not, as the next PlayStation 2 PES outing will also see full online play, as well as "significantly beefed up management stuff."

> Other details were scant. In a press release containing
> 370+ words, incredibly no detailed information was
> revealed, quite an achievement, and perhaps a world
> record in videogames PR.

Dude, you have GOT to be kidding. Video games press releases are the most guff-filled wastes of space in the universe.

Where other industries use the PR to impart information, the games industry use it seemingly for no other reason than because the PR dudes like the sound of their own fingers hitting keys.

370 words is short for a games industry press release, yet press releases that contain even a single hard fact are as rare as an original EA game.

Let's face it, it's an industry that's about keeping even the merest morsel of information secret, so that they can swap it as an exclusive with some magazine in return for a more favourable review score.

RiggerTheNigger 15 Mar 2004 12:32
3/3
I have got PES on ps2 its rubbish now but im pleased that PES is coming to X-Box
Posting of new comments is now locked for this page.