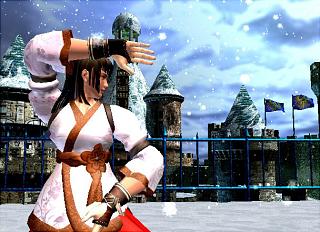 In a brief press release distributed at the AOU 2004 show this morning in Tokyo, the game is described as a more single-player friendly version of Evolution, centred on an all-new challenge mode, in which different fighters and tasks will be put to the player in what seems to be a massively extended training mode-inspired subgame. They will be broken down into various Missions that, when cleared, open up the challenge mode.

New items will be thrown into the mix and, more interestingly for devotees of the series, every character will have new moves and a slightly tweaked control system. Massively enhanced AI has also been promised, which, according to series creator Yu Suzuki, will make VF4 Final Tuned's CPU players indistinguishable from human battles.

The old ranking system of letters will be replaced with a more cerebral title system, with each fighter being digitally assessed and given a title, such as "novice" or "master" or whatever - You get the idea?

The game, which will be released onto Sega's Naomi 2 coin-op platform, will more than likely see a PlayStation 2 release within the next 12 months, though speaking on the matter this morning, Sega Europe said, "There are certainly no plans for a home console port, certainly not for the time being if at all - it's just an incremental arcade refinementswith new AI, some new moves and new missions," which is a blow, though of course, we live in hope.


VFNet Subscribers will be given the opportunity to move onto an all-new Final Tuned System, we have been assured.