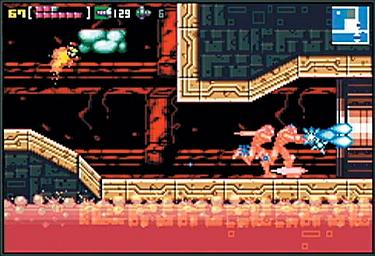 All Images (14) »
Nintendo has released a whole bunch of screens from Metroid: Zero Mission, the latest in the ongoing two dimensional renaissance of the classic space/action platformer.

As you can see, it would appear that little has been changed from the winning formula that has underpinned the series since its debut on the NES, with elevator antics and big ugly bosses galore. It would seem that the acclaimed cut-scenes from Fusion have been beefed up, making good Nintendo?s comments that the new Game Boy Advance outing will have a richer and more complex story that the original.

There?s no word yet on exactly how Zero Mission will interact with the GameCube?s Metroid Prime 2, though you can be assured of updates on the run up to the game?s Easter 2004 release.
Companies: Nintendo
Games: Metroid: Zero Mission