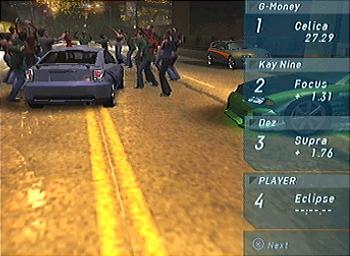 NFS: Underground - The party's at my car park
All Images (2) »
The latest weekly ELSPA charts, compiled by ChartTrack, show the buying decisions of the last minute Christmas shoppers, and also those of the lucky individuals blessed with a new console and a handful of gift vouchers, making the titles on the chart arguably the true Christmas winners.

In the All Formats chart, Medal of Honor: Rising Sun has taken a bit of a graze, being bumped off the number one position by another EA big hitter, Need for Speed: Underground. The First Person Shooter now takes second place behind the night-time mod-head racer. Still, there are another three titles remaining the top 10, with FIFA 2004, Lord of the Rings: Return of the King and Sims: Bustin' Out placed at three, five and six respectively. Last week's number nine, Harry Potter: Quidditch World Cup slips out of the top 10 to number 13, leaving EA with "only" five top 10 titles. We bet they're crying into their pre-New Year beer.

Ubisoft's excellent yet under performing Prince of Persion: Sands of Time has at last seen some attention from the public, stepping over the top 10 threshold into the number nine position. The French publisher's other triple-A title, XIII, just fell short of line, placing at number 11.

Tony Hawk's Underground and True Crime: Streets of LA hold up Activision's stake in the top 10, though each slip a place as the Sims steps over them. Looking further down the chart, with the exception of Call of Duty at number 40, these two are the only offerings from Activision to get a placing. Not a peep out of Gladius, Secret Weapons Over Normandy, Star Wars Jedi Knight: Jedi Academy or Star Wars: Rogue Squadron III: Rebel Strike.


Making its debut into the top 10 is Rockstar's Max Payne 2: The Fall of Max Payne. Having bounced around the 11-20 bracket, the title squeezes into the tenth place. Like Prince of Persia and XIII, it looks like the heavy TV advertising might be paying off. Notable by its appearance at number 18, and more importantly in the Xbox chart is the massively anticipated Grand Theft Auto Double Pack. It manages only to debut in the Xbox chart at number six, but this is because the title isn't even supposed to be on sale until Jan 2nd. Looks like some retailers have up to no good again!

Lastly, holding on to a top five position is Vivendi's Simpson's Hit and Run.

One thing is clear from this year's Christmas top 10 charts, be it last week or this. Each top 10 entry comes in at least three different flavours. If publisher's want the kudos of a chart topping title, they're in no longer in a position to release it on a single platform.
Companies: Activision Electronic Arts Rockstar Ubisoft Vivendi
Games: FIFA Football 2004 Max Payne 2: The Fall of Max Payne Medal of Honor: Rising Sun Need for Speed: Underground Prince of Persia: The Sands of Time The Lord of the Rings: The Return of the King The Simpsons: Hit and Run The Sims Bustin' Out Tony Hawk's Underground True Crime: Streets of LA XIII