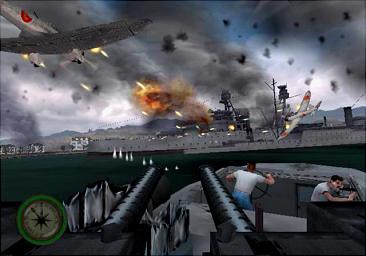 MOH: Rising Sun
All Images (5) »
We can reveal this morning that Electronic Arts has again dominated the UK Christmas charts, taking the coveted number one all-formats slot as well as securing an incredible six out of the top ten places.

The all formats top ten pans out as follows:

Although Medal of Honor: Rising Sun got a lukewarm reception with press compared to previous games in the series, as did Need for Speed: Underground, EA has proved once again that power-marketing at this key time of year is exactly what it takes to fend off the competition.

The self-styled ?best racing game of all time?, namely Bizarre Creations? Project Gotham Racing 2 made a comeback of sorts, dropping a gear and squeezing into position 21 from what was a disastrous number 33 - still a bitterly disappointing result for the most heavily advertised game this Christmas.

As expected, the PlayStation 2 chart reflects the all-formats (given that it represents 80% of all sales) with Rising Sun, Need for Speed and Simpsons Hit and Run taking slots one, two and three respectively.

Project Gotham 2 heads up the Xbox full-price charts, followed by the excellent Rainbow Six 3, with MOH: Rising Sun at number 3. The GameCube saw, as you may have expected, massive sales of Mario Kart: Double Dash!! which easily took the number one place, with Simpsons: Hit and Run and Rogue Squadron III: Rebel Strike following in its wake.

So those are the winners for this Christmas, but it?s the story of the losers that makes for more interesting reading and this year?s big, big loser is - without question - French publisher/developer Ubi Soft. Prince of Persia and XIII, both excellent games, both multi-format and both among the most heavily advertised this year, failed to make any impact on the all formats top ten or even the platform specific top five. Although both games are sleepers and will more than likely sell steadily throughout next year, this will still come as a devastating blow to the company, who had high hopes for both titles.
Companies: Electronic Arts
Games: Call of Duty Championship Manager Season 03/04 FIFA Football 2004 Finding Nemo Harry Potter: Quidditch World Cup Mario Kart Double Dash!! Medal of Honor: Rising Sun Need for Speed: Underground Pokemon Ruby Pokemon Sapphire Prince of Persia: The Sands of Time Star Wars: Rogue Squadron III: Rebel Strike Super Mario Advance 4: Super Mario Bros. 3 The Lord of the Rings: The Return of the King The Simpsons: Hit and Run The Sims Bustin' Out The Sims Makin' Magic Tony Hawk's Underground True Crime: Streets of LA XIII