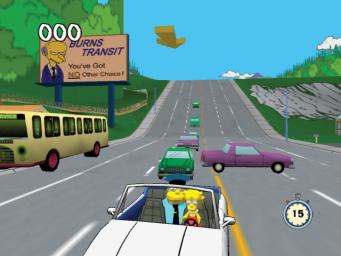 Not the most surprising news of all time, but Sega of America has filed a suit against Fox, EA and Radical Games, stating that the 2002 cross-platform title Simpson's Road Rage was designed to "deliberately copy and imitate" its own arcade smash Crazy Taxi.

Sega apparently holds a US patent on the game, known as the '138 patent', which details how players take on the role of a taxi driver who has to accomplish outrageous driving stunts to pick up passengers and quickly deliver them to their destinations.

The suit asks the court to stop the sale of the million-plus selling Simpsons racer, recall any copies at retail, and also seeks damages for lost profits.