Available from next Tuesday at all good games retailers. And some rubbish ones too. 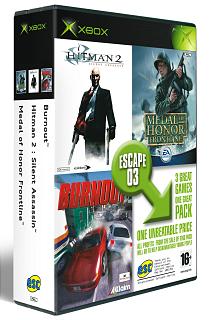 The Entertainment Software Charity (ESC) has announced that Microsoft has confirmed its commitment to the video and computer games industry's charity games pack initiative, ESCAPE. Microsoft will release a charity pack for the Xbox games console on December 2, with the support of publishers Electronic Arts, Eidos and Acclaim. The bargain pack of three games, Hitman 2: Silent Assassin, Burnout and Medal of Honor: Frontline, joins the already released PS2 triple pack which included Commandos 2: Men of Courage, World Rally Championship II and the marvellous SSX Tricky.

Both packs retail at just Ł29.99, and it all goes to a worthy cause. ESC is a not-for-profit organisation, established by some of the major players in the games industry in 2000. On the release of the Microsoft pack, Mark Strachan, CEO of the ESC, commented, "Another incredible pack with three high profile titles and all for Ł29.99. The amount of goodwill and collaboration within the industry that goes into bringing these packs to market is truly astounding. It is wonderful to see so many companies pulling together for the benefit of others."

Chris Lewis, Director, Home and Retail Division, Microsoft UK, said: "We're pleased to support ESC in this initiative. It's a great way for us to give back to the community and help bring a brighter future to young people in the UK, as well as provide great Xbox gaming experiences for a fantastic price to gamers."

So, if someone you know needs to give their games collection a bit of a boost ? and Christmas is coming of course ? you could do a lot worse than an ESCAPE 2003 package. It?s the gift that keeps on giving!
Companies: ESC
People: Chris Lewis Mark Strachan
Games: Burnout Commandos 2: Men of Courage Hitman 2: Silent Assassin Medal of Honor: Frontline SSX Tricky WRC II Extreme